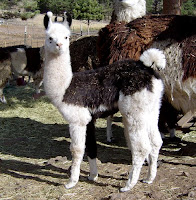 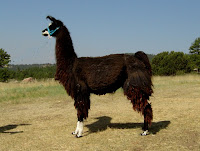 Winona Wildfire and IceBreaker
Okay - we're still trying to decide on a name for the black and white cria. Momma is Split Rock Winona Wildfire - Poppa is IceBreaker. Here are the names we're debating on:
Split Rock Wildfire's Hotshot
Split Rock Ashes in the Snow
Split Rock Fire Breaker
Here's the thought process: Wildfire (HOT) and IceBreaker (COLD) so Wildfire's Hotshot because the Hotshots come put out wildfires. But then hot ashes (the black) in the snow (white) is the same theme (I would still probably call him HotShot because he's such a precocious little man!) However, Jim doesn't think Ashes in the Snow sounds like a name for a male so he suggested Fire Breaker - kind of the same theme only we're taking the last part of Mom's name and the last part of Dad's name. Any comments, suggestions, etc.?! We don't have to decide for another 10 months, unless we decide to show him next spring, in which case I'll have to get his ILR paperwork filed before the show and then I MUST have a final name for him.
Posted by Split Rock Ranch at 4:31 PM 3 comments: