Its been crazy around here...

I apologize for not posting much lately. Things have been crazy around here.

In late May our son-in-law hurt his back at work and ended up in ER via ambulance. Three days later our son broke his leg and ankle in two places while jumping on the trampoline with his stepson. Our SIL is now back to work on light duty after a month off with PT on a regular basis. Our son had surgery 10 days after he broke his leg. They put in a plate and 6 screws. He is healing nicely.

Over Memorial Day weekend we attended a llama show. It was so much fun seeing all our llama friends again! We took River, our Standard Poodle, with us and had him stay in our tack stall. He was a real trooper that weekend!

We sheared all the llamas that we took to the show. I've posted pictures of all of them previously but the most dramatic change was Midnight Phoenix.

Here is how he looked before shearing. 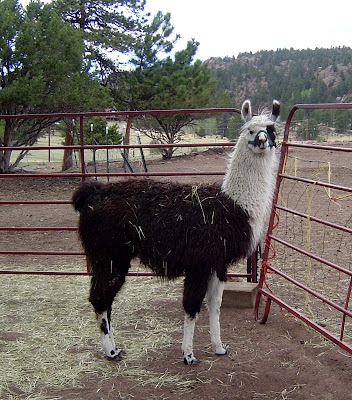 And here is how he looked after shearing. WOW! 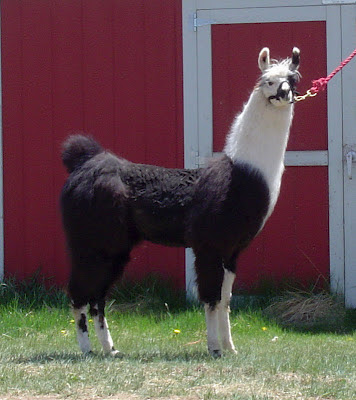 He looks so much taller and more athletic after shearing!


On Father's Day we went to South Park to hot air balloon. This has been a tradition for us for several years now. DH used to crew for a balloonist and worked as one of the launch directors each year at the Colorado Springs Balloonist Festival every Labor Day weekend. High winds this Father's Day didn't allow us to fly. We enjoyed breakfast with our friends and then came back home to feed the critters before heading down the mountain to Colorado Springs. While visiting with my Dad that afternoon, we had the TV on and saw an alert that there was a wildfire in Lake George (which is a few miles to the northwest of our ranch). At the time, they reported that the fire was 2-4 acres in size. No big deal. Within a half hour, they were reporting that the fire had grown to over 100 acres. A bit more of a concern. We decided we should head back up the mountain, just in case. When we left, we could see smoke billowing over the mountain already. By the time we got to Woodland Park, we could really see the smoke. 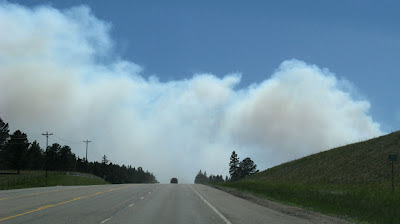 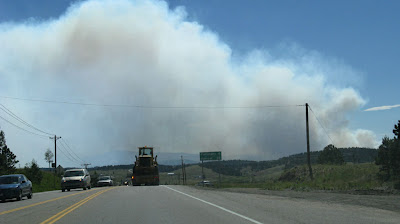 We drove all the way to Florissant (8 miles past Divide) to get a better look at the fire. The smoke there was very thick and dark. It pretty much obscured the sun from view. 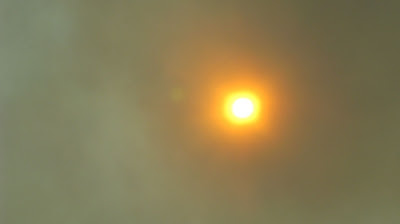 After we got back home, we logged onto our computers to monitor the situation. I read that certain areas were being evacuated and others were on pre-evacuation notice. I called a friend who lives in one of the areas and left a message for her. She called me back a short while later saying the Sheriff had just knocked on her door and told her she had an hour to an hour and a half to pack up what she could and get out. We grabbed one of our animal crates, hooked up our stock trailer to the truck and headed to her house. We got into the subdivision just seconds before the Sheriff closed the road! By the time we got to her house, she told us the wind had changed direction and they had a little more time to get packed and out. Another friend was there, helping to load cats into crates and we helped get them all into her vehicle. We loaded several boxes and bins of clothing, files, etc. into our truck and trailer and headed back to our place so we could get our animals fed. By this time it was already dark so we did chores with headlamps on. This was the Springer fire. It is now fully contained and some of those crews moved on  to the next wildfire - the Waldo Canyon Fire.

In the week after the Springer Fire started, 20 small fires were started around our county by an arsonist. Needless to say, residents were as nervous as a long tailed cat in a room full of rockers! The arsonist is still at large.

Last Saturday, June 23rd, we headed down the mountain again to attend the birthday party for our stepgrandson in Colorado Springs. As we drove down Ute Pass, we saw a plume of smoke coming from an area called Waldo Canyon which is an extremely popular hiking trail in the area. By the time we got down out of the pass, the fire was sending up huge plumes of billowing smoke. We stayed at our son's house for a little while and watched the smoke and flames growing by leaps and bounds. We decided that we had better head back home before the road closed and we were unable to get back up the mountain. We heard that the line of traffic was bumper to bumper so we headed south out of Colorado Springs, then west and then back north to our ranch. This was about a 40 miles detour but virtually no traffic so we got home much faster than if we would have taken our normal route.

We could see the smoke from our ranch when we got home on Saturday. The mountain you see in this photo off to the right of the smoke is Pikes Peak. 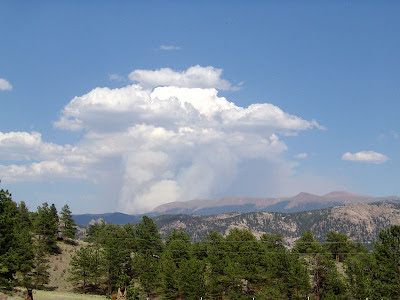 Here is a map showing the progress of the fire through Wednesday, June 27th. 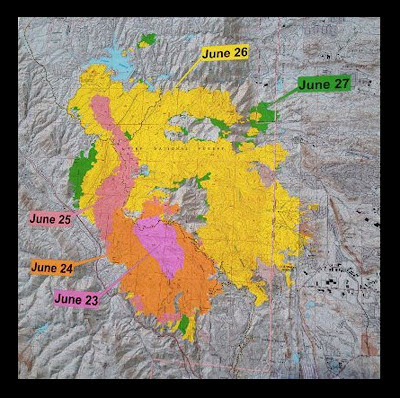 As you can see, on June 26th, the fire exploded (yellow area). The winds changed late in the afternoon that day and the fire roared over the ridge and down the mountain into neighborhoods on the northwest side of Colorado Springs. KKTV.com had a live stream video in place starting Saturday afternoon and they were reporting 24/7 on the status of the fire. I sat here and watched in horror as that fire raced into neighborhoods as residents were fleeing the area. All I could do was gasp and cry. I will never forgot those images and can only begin to imagine how terrified the people fleeing the area were.

Last night, some people were allowed back into their homes. At the same time that some mandatory evacuations were lifted, other residents attended a private meeting to discover the fate of their homes. 346 homes were destroyed on June 26th. Last night, officials discovered human remains in one of the burned down houses. Other people are still missing but they aren't sure whether those people are on vacation or if there will be more bodies discovered in the burned areas.

A beloved attraction on the west side of Colorado Springs was lost that day. Flying W Ranch was burned to the ground. They did manage to evacuate all employees and saved some of their antiques. They plan to rebuild at some point in the future. They were celebrating their 60th year in business this year. Devastating.

Here is a photo that I took from one of our pastures on June 26th. I had been watching the progress of the fire on the live stream video on KKTV.com, looking at the live video on the top of Pikes Peak on their cog railway website and monitoring the various cameras on utepasscams.com. I saw the wind change direction that afternoon and knew it was going to pose some significant problems for the firefighters. 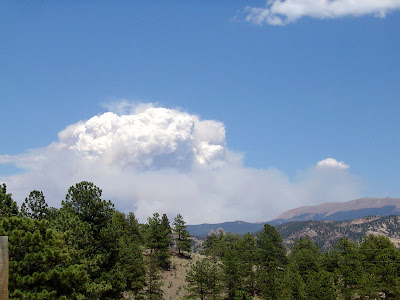 Here are various photos that I captured that day from the cog railway cam.
The first photo is at 3:20 PM 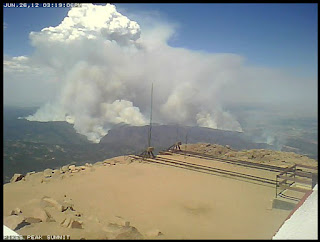 The next photo is at 4 PM 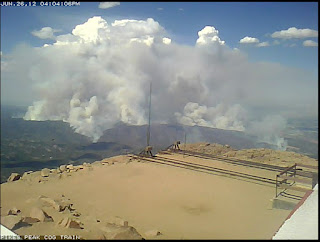 The next photo is at 4:42 PM - Note that the winds have shifted and is now blowing the smoke from the fire to the right (east) (winds shifted due to thunderstorm activity in the area, causing 65 mph winds) 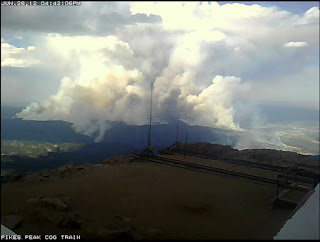 The next photo is at 5:34 PM - this is when the fire was roaring east over ridges and down into Colorado Springs' northwest neighborhoods. 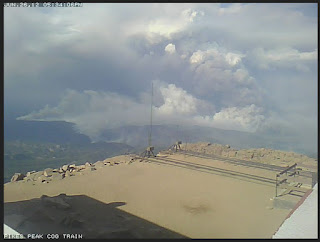 Here is a photo from today at Noon. Things are much better today although the smoke here is worse than prior days (not sure why). 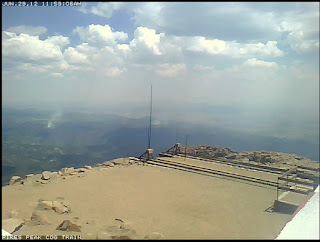 If you're the praying type, please consider praying for rain for Colorado (there are numerous wildfires around the state right now) Prayers for comfort and peace for those affected by this fire would also be wonderful.

I will share more later.
Posted by Split Rock Ranch at 12:16 PM 7 comments: