We say goodbye to a Legend at Split Rock Ranch

This Tuesday we said a very tearful goodbye to a Legend here at Split Rock Ranch. Ivory Pond's Black Jack was our daughter's performance llama. We bought Black Jack from Stage Stop Llamas in the spring of 1998 when Black Jack was almost 7 years old. Black Jack had been trained by the kids in the youth group that Stage Stop worked with. Their first show together didn't go as smoothly as our daughter had hoped but they hadn't had much time to work together prior to that show - it was the Estes Park Wool Market in June of 1998 and there were so many entries back then, you had to qualify to even compete over the weekend. Qualification took place on Friday and we had gotten stuck in stop and go traffic for hours in Denver en route to Estes Park and by the time we got there and got settled, it was already dark out and it was starting to snow. Our daughter was so disappointed that she moped the entire weekend. We were none too happy ourselves since we had driven all the way to Estes Park, spent money on the hotel, etc. and then she couldn't compete. Needless to say, we stopped going to that show, although they did change that rule a year or two later because entries were down. But I digress...

J and Black Jack's next competition was at the LOCC Fall Classic llama show in September of that year. We were newbies to the llama show world and didn't enter them in all three performance classes - we only entered them in Public Relations and Obstacle but not in Pack class because we didn't own a pack. They kicked butt in those two classes and had the entered the Pack class, they probably would have been Reserve Grand Champion.

We bought a little day pack for them to use in the performance pack classes and their next show was the Western Slope and Banana Belt Llama shows in Paonia, Colorado. That show was run a bit differently from other shows - it was held Saturday and Sunday with two judges and two rings - one for performance classes and one for halter classes. One judge would judge performance one day and halter the next while the other judge judged halter the first day and then performance the next. J was very small (she was severely asthmatic and the drugs stunted her growth) and she was very timid and shy. She would stand behind me and I would be her interpreter when she wanted to talk to someone. Because we were also showing several llamas in the halter classes that weekend, I didn't have time to be there to help J with the performance classes. During one of the classes, she accidentally added an obstacle that was on the course but wasn't marked as NOT being part of the course so she lost points but she still earned Reserve Grand Champion that day. She was upset because she didn't hear the judge go over the course description during the walk-through because she was at the back of the pack and didn't see and hear all the instructions. I told her that she needed to say "excuse me" and elbow her way to the front of the pack so she could see and hear the instructions during the walk-through and then ask questions if she needed to. When an adult exhibitor asked her how she did that day, she told them she "only got Reserve Grand" but that "tomorrow I'm going to be Grand Champion!!". He laughed and told her he loved a kid with a goal. The next day, she went to the front of the pack, asked questions to clarify the course and then proceeded to earn Grand Champion. 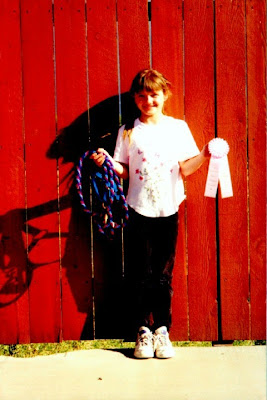 That was the start of many Grands for the J & BJ team. Between 1999 and 2002, they earned 17 Grand Champion awards and 3 Reserve Grand Awards. In six of those shows, they were 1st place in all three classes. They also placed top 10 at Nationals two years in a row. 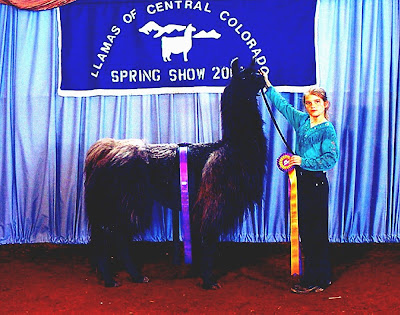 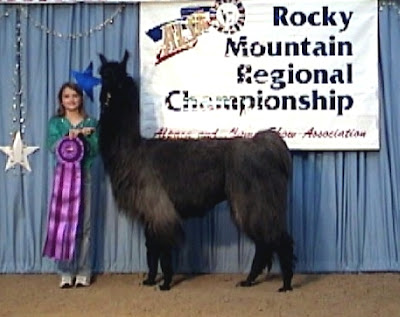 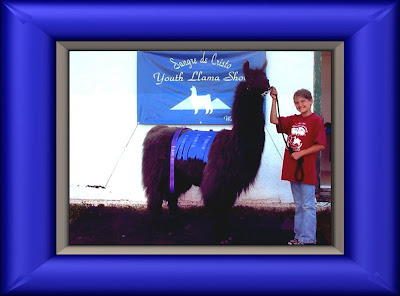 J and Black Jack were such an amazing team, they were a joy to watch in action at the shows. They trusted each other so much, Black Jack would do or at least attempt to do whatever J asked him to.

After the 2002 Grand Nationals show, J made the decision to retire Black Jack. He was 11-1/2 years old and didn't seem to be enjoying the shows as much as he did when they first started showing. J had earned all of her Superior Youth Awards, including top points earner awards, from ALSA by that time anyway.

J's relationship/partnership with her llama, Black Jack, helped her to blossom into the confident young woman she is today. Because she couldn't compete in school sports and lots of other activities that other kids got to engage in, she needed something to help her feel competitive without requiring a lot of physical effort. Showing her llama was exactly what she needed.

Black Jack held a very special place in all of our hearts. He may not have been a legend anywhere else, but he was the stuff that legends are made of around here. 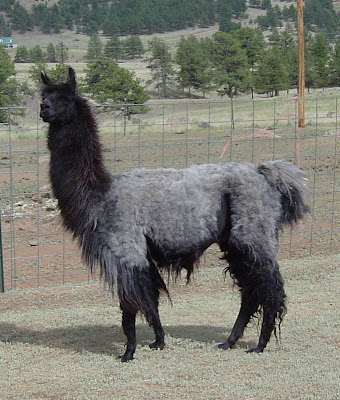 Black Jack had been slowing down for several months, eating less and less and moving slower and slower. This past Monday he was obviously in a lot of pain so we gave him something for pain and then took him to the vet on Tuesday morning. We thought it was colic or an obstruction but the vet detected a severe heart murmur. The vet tubed him with a laxative and we were hopeful that he would pull through. Unfortunately, after checking him frequently after we got back home, I discovered him shortly after noon laying on his side in the shade of the tree...he was gone. We're so thankful that he went quickly and peacefully without days of suffering.

I hadn't sheared Black Jack for a few years because he got too cold in our severe winters. He had the most beautiful silver, silky soft fiber, and I couldn't bury him with that gorgeous fleece still on him so I sat beside his body with a pair of scissors and carefully sheared him. I'm going to wash, card and spin his fiber into yarn and then make J an afghan so that she has something special to remember Black Jack by. He will keep her and her husband warm on those cold winter nights.

Rest in peace Black Jack - you're forever in our hearts
Posted by Split Rock Ranch at 4:21 PM 6 comments: