Wishing everyone a blessed Easter today. 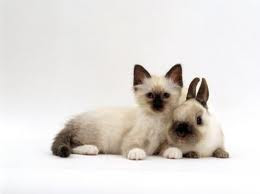 Email ThisBlogThis!Share to TwitterShare to FacebookShare to Pinterest
Labels: easter

My Fleeces are Back from the Mill!! Llama Rovings Now Available!

Several months ago I sent three fleeces to the mill to be processed into roving. I sent a first shearing fleece from our gorgeous silver/gray male, Tempis Fugit. This fleece has been sitting in my studio for a few years, waiting for me to decide what to do with it. It was extremely clean, ultra-soft and an incredible silver/gray color. 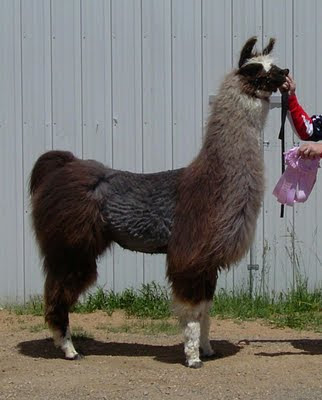 And here is a photo of his first shearing rovings 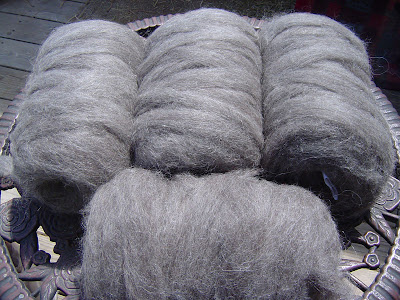 I also sent in Tempis Fugit's second shearing fleece. It processed into a similar roving that is slightly darker and only slightly less fine than the first shearing. 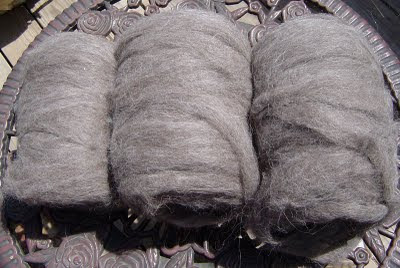 I had some gorgeous rich dark chocolate brown rovings available from a first shearing of Primoris Filius (First Son in latin - he is Tempis Fugit's first son) but that fiber sold quite quickly. I'm going to share a photo of the llama and the fiber though, because it is so gorgeous!
Here is Primoris Filius aka Fil after shearing 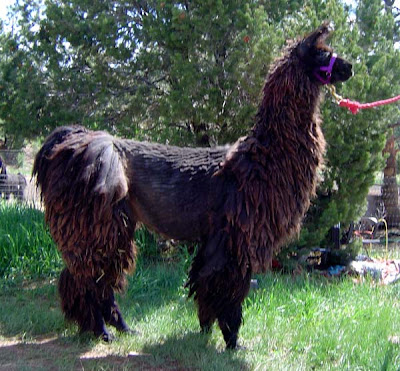 And the bumps of his first shearing roving 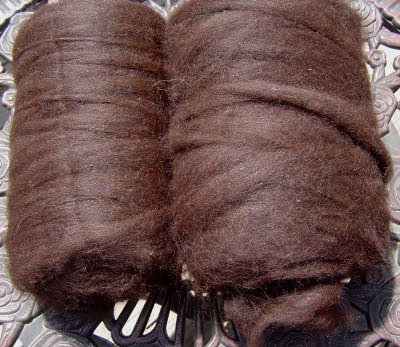 My Somewhere Over The Rainbow Collection made it to the Front Page of ArtFire!

My Somewhere Over The Rainbow Collection made it to the Front Page of ArtFire this morning!

Happy Monday everyone!
Posted by Split Rock Ranch at 8:41 AM 2 comments:

Sorry, I've been AWOL again - A tribute to Gigi

I apologize for being absent from the blog, yet again, recently. I have a very good excuse and this time it isn't good news.

On March 29th our little toy poodle, Gigi, started vomiting. She seemed to feel okay otherwise so I wasn't too alarmed. I fed her some boiled rice with low sodium chicken broth on Tuesday night and she gobbled it down but vomited some of it back up. I thought it was perhaps because she had eaten too fast on an empty stomach. On Wednesday when she showed no interest in food but was drinking plenty of water and throwing up some of the water, I decided to take her to the vet, just in case.

We decided that since she had a normal temp and wasn't exhibiting any other symptoms we would start with a conservative approach first. The vet gave her an injection of Cerenia to alleviate the urge to vomit, gave her some SQ fluids and sent home a box of 5 Cerenia tablets to give her for the next five days. She had a somewhat restless night on Wednesday and seemed to feel better on Thursday. Thursday evening she was a bit more restless and uncomfortable so I put her little bed in the bathroom and turned a nightlight on for her. I put her water bowl and food dish right next to her bed and woke up several times throughout the night to check on her.

Friday morning she was really groggy but I had given her some Benedryl the night before to help her sleep (the vet gave his approval for the Benedryl) so I didn't think much of it. She came into my office with me and curled up in her bed behind my chair. All of a sudden she gasped and went rigid. I immediately picked her up and tried to get her to stand up, which she was unable to do. I picked her up and carried into hubby's office across the hall and he agreed that something was most definitely not right. I called the vet's office and they told me to head in right away. I was still in my bathrobe and slippers so I quickly dressed while hubby kept an eye on her. We put her in the car on the front seat on a towel so I could keep an eye on her while I drove her to the vet's.

It is at least a 30 minute drive into town and my little girl crossed The Rainbow Bridge when we were about halfway into town. She crossed over with my hand on her and my voice calling the angels to guide her. After she stopped breathing I was sobbing so hard I was afraid I was going to pass out so I had to calm myself down before I had a wreck. I continued on to the vet's office and carried her in, sobbing to them that I thought she was already gone. Fortunately nobody else was at the vet's office so they got me in immediately. The vet listened for a heartbeat, then put his arms around me and gently told me that she was gone. I was hysterical. I couldn't believe it. He started to tell me what my options were for her and I immediately told him she was coming back home with me because I wanted to bury her someplace where I could visit her grave. The vet gently wrapped little Gigi in the towel and carried her to the car for me and placed her in the passenger seat. He hugged me and told me how very sorry he was for my loss and while I was sobbing hysterically he urged me to please come back inside until I was a bit more calm; he was worried that I wouldn't be able to drive home. So I went back inside and his staff hugged me and told me how sorry they were, handed me a box of tissues and offered me a private room if I wanted it. I spent a little while crying and blowing my nose, then thanked them for everything. I asked them to please send me a bill for the visit and the vet told me there was no charge whatsoever for what he had done for me. He hugged me and said "we love you, please drive home carefully". I assured them all that I loved them and thanked them for all they had done for me and for Gigi.

I am so grateful to my vet and his staff for their compassion, not only for the animals that they treat, but for the people who share their lives with these animals. Several days after Gigi passed I received a beautiful Rainbow Bridge card from the vet along with a hand written note telling me that Gigi was obviously a very loved and integral part of our lives and to please remember her with love and cherish the good memories of her.

I think for the first few days I was just numb. I would do things like look around for her to ask if she wanted to go outside. Then when the numbness wore off I would think of Gigi and realize that she was never coming back. Last night was incredibly gut wrenching for me. When I thought of her, I felt like somebody had punched me in the stomach. I cried and cried last evening.

I know to some people, it is "just a dog". To those who know that our companion animals are so much more than that, thank you for understanding how very difficult it is when we lose one, especially when it is sudden and unexpected. 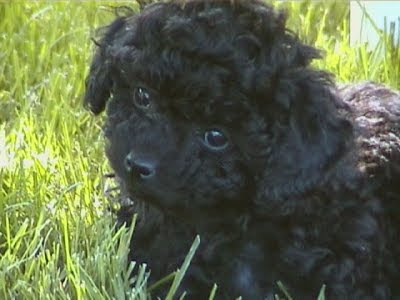