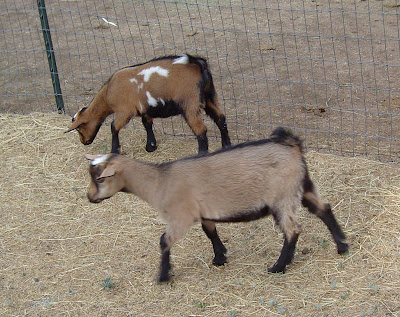 Here is how the baby looked immediately after birth (I knew Minnie was in labor so I was in and out all day long, checking on her and I knew when she was close so I brought out towels, the birthing/vet bag and my camera ahead of time). Crias (lama babies) are born with "toe caps" on their feet to prevent their toes from tearing their mother during the birthing process. You can see the white caps on the baby. 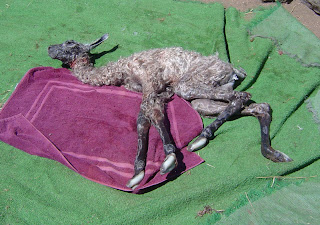 It doesn't take crias very long before they attempt to stand up. They are pretty wobbly at first and take a few tumbles before they master all four legs at the same time. Here is the baby after she wobbled about for a little while. 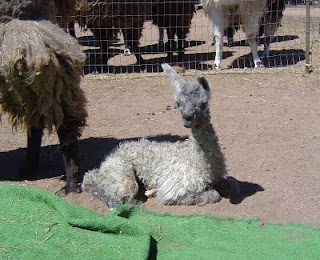 I had fed her mother a flake of alfalfa on the green mat and the cria rolled around in it so in this photo (above) she's full of alfalfa flakes. 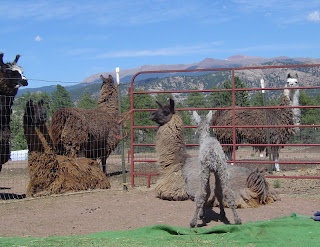 And here she is (above) after she has mastered all four legs at the same time. Her mother is resting and awaiting the delivery of the placenta. 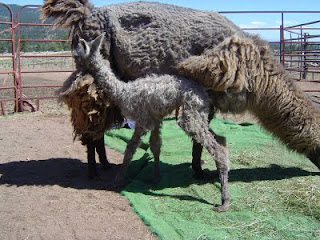 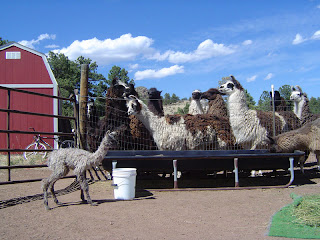 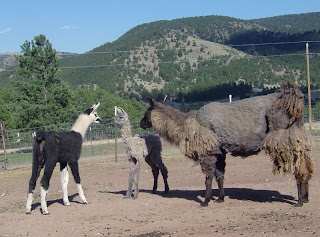 After the mother has passed the placenta and the new cria is walking about fairly well, we let them back in with the rest of the herd. Above, Phoenix (born 6/4/11) is greeting the newest cria, under the watchful eye of Minnie Pearl.
Phoenix got a little too excited about the new baby and tried to jump on her. Fortunately, Tina Fey (the red llama) stepped in just as Phoenix tried to jump on the new cria.
And here is how the new baby looked about 18 hours later. She is finally all dried out. And she sticks very close to her mother! 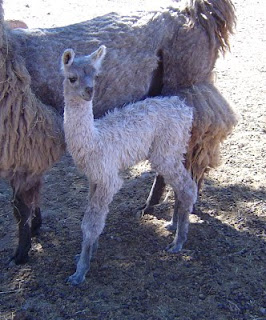 We are still contemplating what to name the new cria but are considering Roses, Champagne & Pearls (roses and champagne because she is rose/gray/silver in color and pearls because her mother is Minnie Pearl.) Some have said they think they name is too long and suggested Champagne & Pearls but I have been calling her Rosie so I think she will most like be named Split Rock Roses, Champagne & Pearls aka Rosie.
Here is a photo of the sire of this cria - his name is Shimmering Sands. 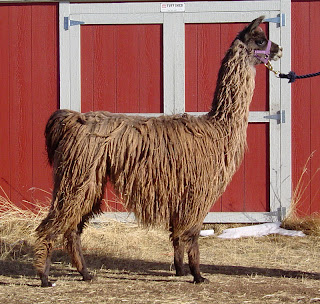 Our oldest llama hits a huge milestone today - he turns 20! This is Ivory Pond's Black Jack. We bought Black Jack in the spring of 1998 for our daughter, Jackie, to use as a youth performance llama. Black Jack was almost 7 years old when we bought him and had been used by quite a few youths in the show ring.

Here is Black Jack and Jackie after winning first place in every event and Grand Champion in her youth class at the 2001 Sangre de Cristo Llama Show in Westcliffe, Colorado. At this show they got a perfect score in two out of the three classes. They missed one point in the pack class because Black Jack didn't step on the last step coming off the bridge. The judge said he rarely gives perfect scores and he was actively looking for something to "ding" them on but couldn't find anything until the missed step in the last class. So out of a possible 240 points they scored 239 points! 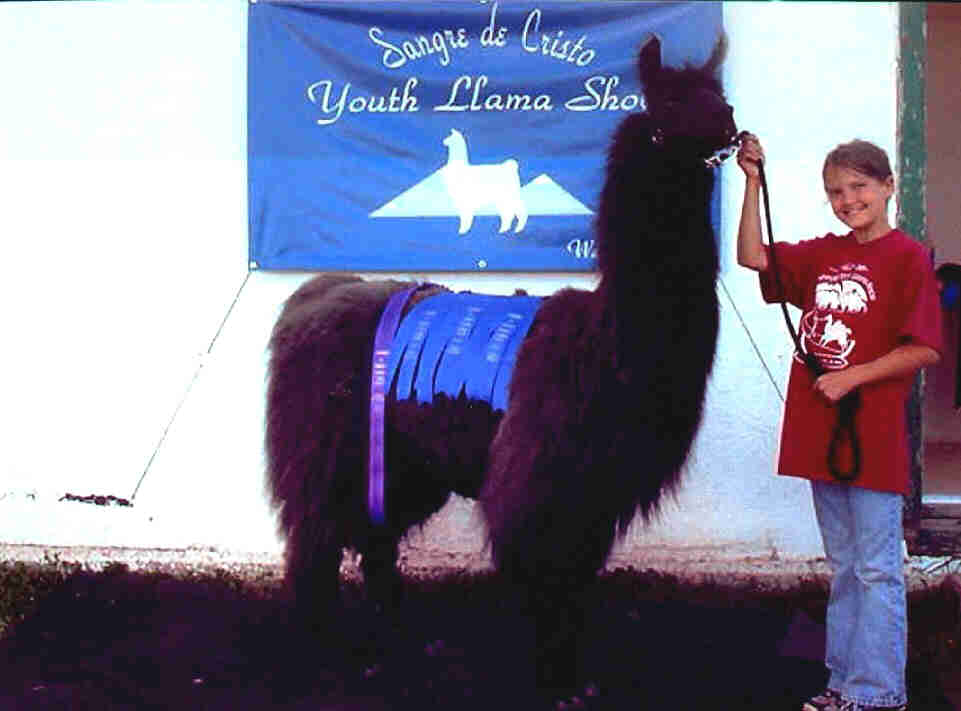 Here is a compilation of the awards won by Jackie and Black Jack over the span of four show seasons.

I'll write more later as a tribute to Black Jack, who we affectionately call "the bestest best llama in the whole wide world".
Posted by Split Rock Ranch at 7:50 AM 8 comments:

Chillin' on a Sunday Evening

Elton has the right idea for how to spend a Sunday evening! 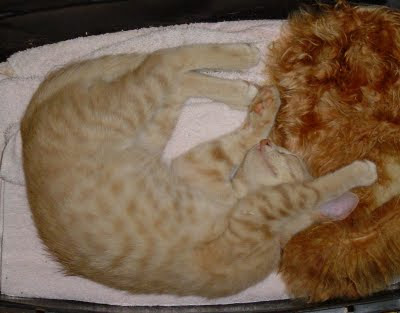 I went out to take photos of a fire burning about three miles to the south of us and when I was coming back from the turnout pasture I went in to see little Midnight Phoenix. He started posing for me so I got a couple of really good shots of him practicing his show ring stance. He is four days old in this photo. You can see how much different he looks from his newborn and day old photos! Phoenix is going to be our next halter show llama. He has the same style and presence that his grandsire, Midnight Hour, did. 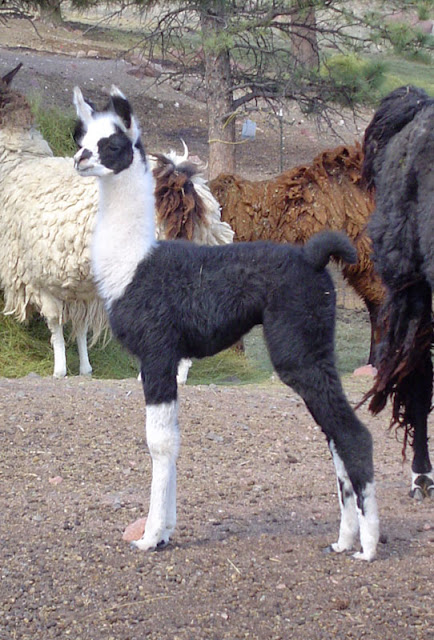 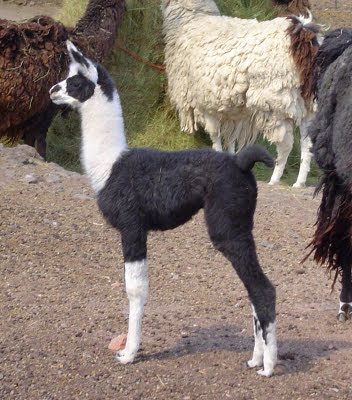 On Saturday, June 4th, Split Rock Winona Wildfire gave birth to a beautiful 30 pound male cria (baby llama). I suspected that Winona was in labor that morning but we already had plans to go to Colorado Springs to celebrate my birthday and my Dad's birthday. We always celebrate our birthdays together and this was a milestone birthday for Dad - his 75th! He proudly announced that he made it three-quarters of a century. Since Winona has had three other crias and wasn't a first time Mom, we felt comfortable leaving for the day. When we got back home a little before 5 PM we noticed that one of our studs was pacing the fencing in his run and we didn't see any of the females when we drove up so we knew something was going on. I left my purse and everything else in the car and headed out to the pasture to see what was going on. As soon as I got to the end of the privacy fence around our back yard, I saw that all the girls were gathered together under one of the big pine trees in their pasture. I knew that meant that either there was a brand new baby just born or she was still in the process of giving birth. I hollered to DH that we had a baby and he ran into the house to get clean towels and the birthing bag. I saw that the baby was partially out; his front legs and his head were out but his shoulders were stuck. DH came back out with towels and birthing bag and he grasped the front legs of the cria and gently pulled to loosen the shoulders. The rest of him quickly slid out into my waiting arms. We toweled him off an pulled the birth sac off him while all the females, including momma llama, sniffed and hummed to the new arrival. I sprayed the umbilical cord with iodone and DH carried the cria to an area where we normally put newborns and their Moms so they can bond without all the other llamas intruding. I gave Winona some grain to eat while her cria started trying to stand.

I went back to the car and got my purse, etc. and changed into my work clothes, grabbed my camera and went back out to feed the horses and our two elderly llamas who are not in large pastures where we have bales of hay so the llamas can free feed. By the time I got back to check on the new cria, he was up and toddling about.

Here is a photo of him when he was first on his feet. 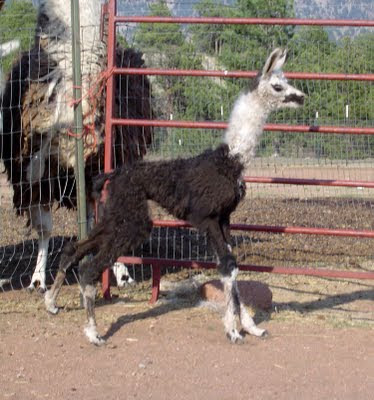 And here is the other side 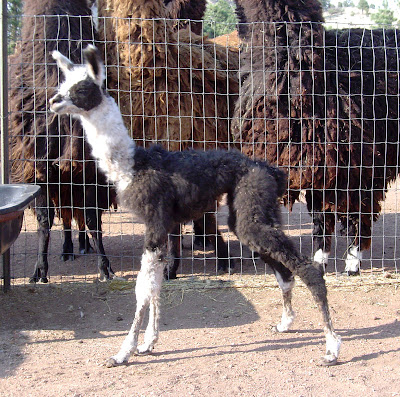 I haven't used the video feature on my digital camera until recently and I was surprised at how easy it is to use and download the videos! Here is a short video I did of the cria as he was toddling about trying to figure out where he was supposed to nurse from.


When he finally got his sea legs and had nursed, we opened the gates and let them go back in with the rest of the female llamas so everyone could say hello to the newest member of their herd.

Here he is with his momma, Winona, before we let them back in with the rest of the girls. 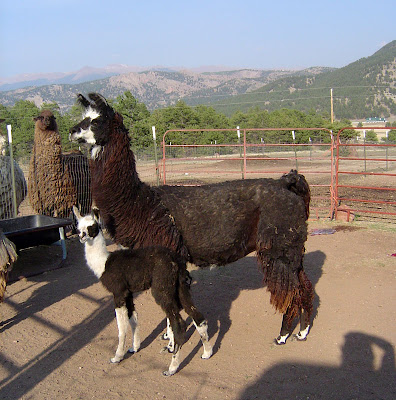 The dam's name is Split Rock Winona Wildfire; she was born at the height of the Hayman Fire in June of 2002. The sire's name is Midnight's Kemui Yama, which is Japanese for Smoky Mountain; he was born during a wildfire across the road from us in June of 2006. This is his first cria and we are thrilled with him. This cria was born during the wildfires raging in Arizona and the air here has been filled with smoke for days now. 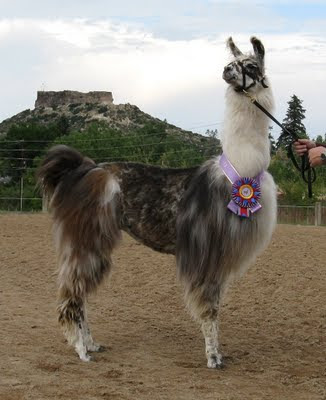 We knew that we wanted a name with "fire" in it or something that gave the sense of fire. We also wanted to include Midnight in the name in honor of his paternal grandsire, Midnight Hour who passed away from cancer this past January. Somebody suggested Firestar, which we liked. But Midnight Starfire rolled off the tongue easier so we were considering those names. But then someone who read the story about his background suggested the name Phoenix - to represent rising from the ashes of fires, which is perfect! So, we are going to name him Split Rock Midnight Phoenix. He already answers to the name Phoenix so we think it is perfect for him.

Here he is the next day when he was about 20 hours old. He was all dried out and fluffy so he looks totally different than he did in the first photos when he was still damp. 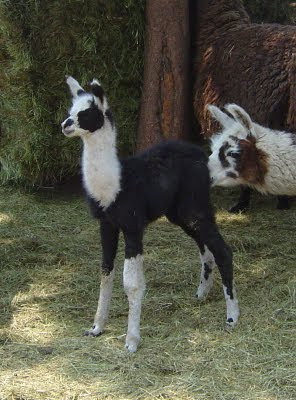 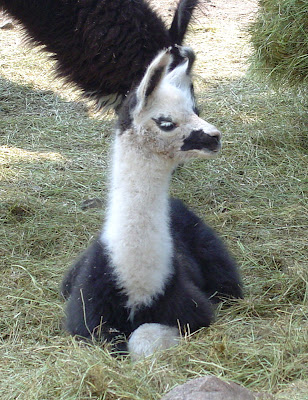 We expect Midnight Phoenix to be our next halter show llama! He will be eligible for shows as of November 4, 2011 so he'll miss this year's show season but he'll be ready to go for the 2012 show season! We're hoping he'll follow in his sire and grandsire's footsteps.
Posted by Split Rock Ranch at 11:50 AM 9 comments: