Spinning, Dyeing and Working with Fiber

I thought I had posted photos of the yarns I've been working on lately and realize in going back through my posts that I've mostly been showing and talking about the foster kittens! Honestly, I do work around here and not just play with kittens all day long!

My latest projects have been to spin a roving that I snagged from somebody on Ravelry who was destashing. The roving is called "Just Figs" and was the March/April spin along roving for the Into The Whirled group. One of my customers fell in love with this colorway but only had one roving and needed more yardage so when I snagged this I asked her if she was interested in having me spin this for her. Of course she said yes!

So, here's how the roving started out. It has lovely purple, russet, gold and soft green in it and they blend so beautifully together. 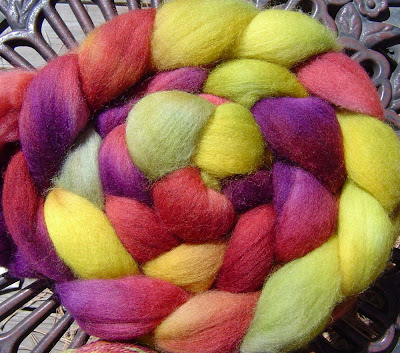 I spun the first 4 ounce roving and then Navajo-plied it. Navajo plying is also called chain plying. Basically you form a big loop or chain and then ply the yarn back on itself; it is a 3-ply yarn and the beauty of this plying method is you can keep those colors together rather than have them fall where they may, looking more like a barber pole. 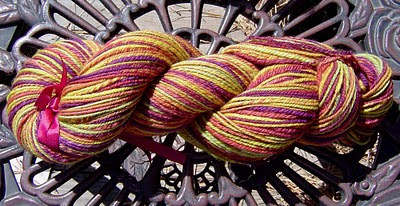 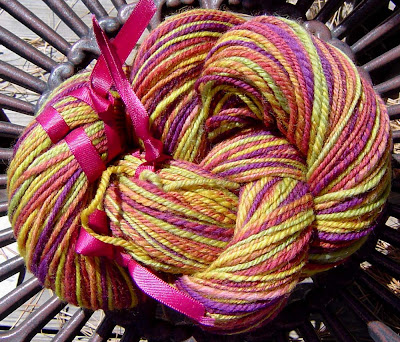 I have another 4 ounce roving that the customer originally wanted to have spun two-ply but I emailed her photos of the N-ply yarn and she loves it so much she decided to have me N-ply the second roving, too. I'm about half way through spinning that skein.
Day before yesterday I decided to start dyeing up some skeins of yarn to sell in the store. It takes so much time to handpaint rovings and handspin them; I wanted something that gives me almost instant satisfaction so I hand painted several skeins of yarn. These skeins were dyed in the same dye pot using the same dyes applied at approximately the same rate on each skein. The darker skein is 100% New Zealand wool which is coarser than some wools but it showcases color sooo well and it is a perfect yarn to use for knitting or crocheting something that you want to then machine felt. The lighter skein is 92% wool and 8% acrylic and is a sock weight yarn. I'm not sure if this is a superwash wool or not, the skeins are not marked superwash, but it took up less dye than the NZ wool skeins.
I took photos of the skeins after dyeing and drying and then again after I reskeined them into 2 yard long skeins. I love how the colors look so different after the skeins have been rewound! 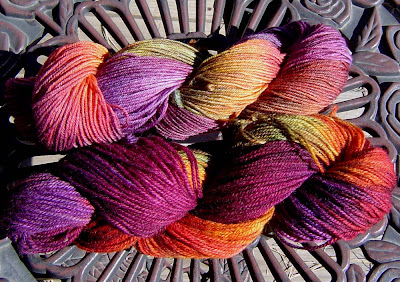 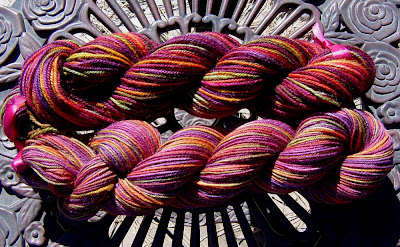 I listed these two skeins in my Etsy store yesterday and then posted them on the Split Rock Ranch Facebook page. By the time I went back to get the URL for the second skein, there was only one skein left. The first one had already SOLD! By the time I finished posting the second skein on Facebook and got back to my Etsy store the second skein had sold, too! The woman that I am spinning Just Figs for fell in love with these yarns and wanted to add them to her order.
I  was a little disappointed that the skeins turned out so dark and so predominantly purple and burgundy so yesterday I did another dye pot with the exact same skeins of yarn. And here are the results of using less burgundy and purple and longer sections of gold and green. 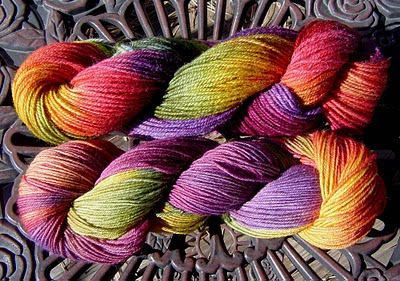 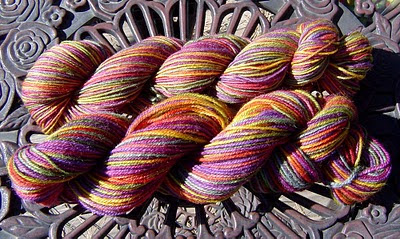 And here are all the skeins together - even though one set is lighter and has more gold and green, they go together beautifully and they are perfect with the Just Figs yarn! 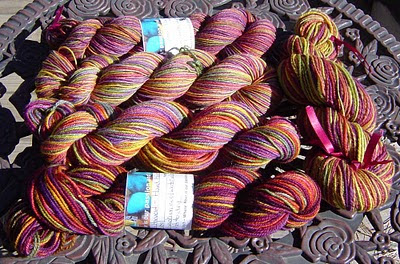 This morning I sent photos of the second batch of yarns to the customer to see if she would prefer to have the lighter skeins instead. She said she wanted them in addition to the ones she already bought! I was so tickled that my last two days were so productive and that I have a happy customer who will have some serious yardage to work with when I'm done with the next skein of Just Figs and get all these yarns shipped out to her.
I named these yarns Ceres in honor of the Roman Goddess of Harvest. The colors seemed appropriate. I am in love with this new colorway!
Posted by Split Rock Ranch at 7:17 PM 9 comments:

Kittens and Pups - What a lazy crew!

Over the weekend, I caught little Blackberry, under Munchkin's tutelage, harassing poor Rosie, our Cockatiel. Fortunately the bird bites hard enough that once is enough to teach the cats and kittens that she does not make a good play toy. She is, however, good for some cheap entertainment value. 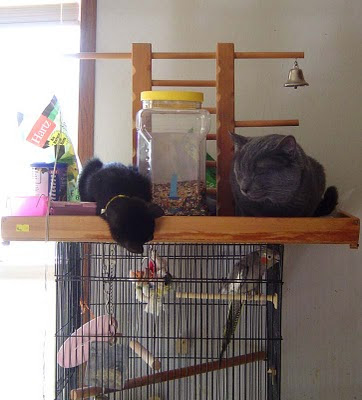 And this morning while I was spinning in the great room, the motley crew is lounging around - apparently they all did a little too much bird watching this weekend! 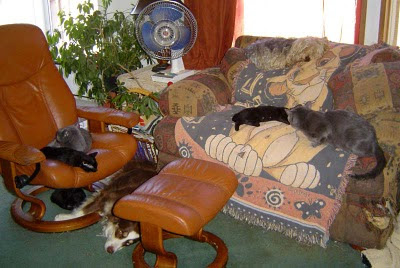 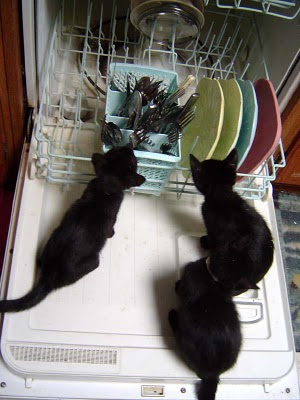 I posted this on Facebook yesterday. It is my foster kittens snoopervising loading of the dishwasher. My friend Barb put this comment under the photo, which I think is absolutely perfect!
Ah the Itty Bitty Kitteh
Dish Washing Committee
Posted by Split Rock Ranch at 12:38 PM 5 comments:


Do any of you watch Dancing With The Stars? I love watching it and this season's line-up is one of the best, in my opinion. I recorded Monday night's episode and watched it yesterday while I was spinning. Jennifer Grey and Derek Hough danced the Viennese Waltz and it took my breath away. I cried watching them. They danced to the song "These Arms of Mine" which Jennifer danced to with Patrick Swayze in 1987 in the movie "Dirty Dancing" - one of my favorite flicks! She got very emotional, remembering Patrick Swayze - it was very touching.
Posted by Split Rock Ranch at 10:53 AM 5 comments:

We took a drive yesterday to Breckenridge, Colorado, to visit a gallery featuring the work of energy artist Julia Watkins. I fell in love with one of her paintings and bought an original signed 5"x7" framed painting titled Sentient Being II. Appropriately enough it is of an Aspen grove right here in Colorado. The photos of her work don't even begin to do justice to how it looks in person. The original paintings have raised swirls on them and the colors are so incredibly rich and vibrant. You can view more of Julia's work on http://www.platris.com/ 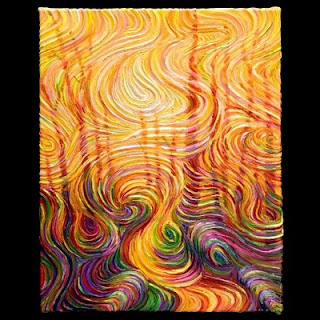 And here are a few photos of the Aspens and Fall foliage that I took while we were on our way to and from Breckenridge. Most of the photos were taken out of the moving vehicle with the window down and I haven't had a chance to tweak the photos or crop them but you get the idea. It was a beautiful, warm and sunny day that was absolutely perfect.
This particular photo was taken from Main Street in downtown Breckenridge. Isn't it gorgeous?! 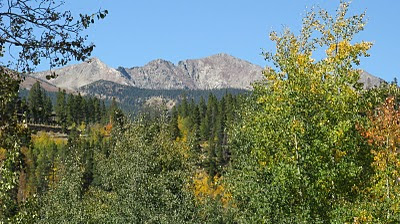 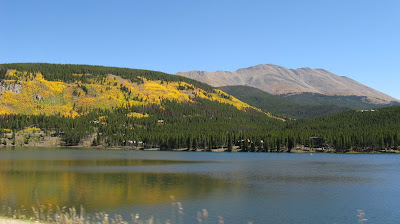 The above photo is of a small lake near Blue River. 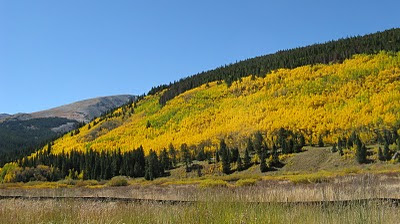 This photo was taken just outside of Breckenridge 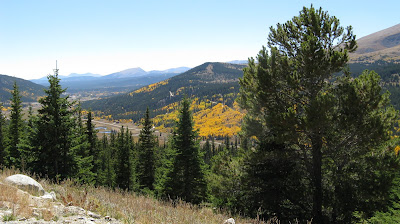 And this final photo was taken just this side of Hoosier Pass
Posted by Split Rock Ranch at 12:47 PM 6 comments: 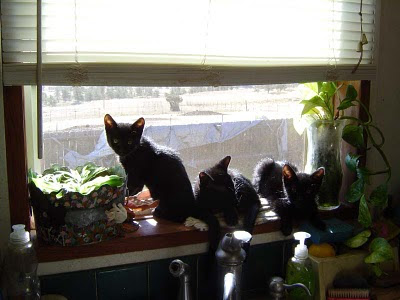 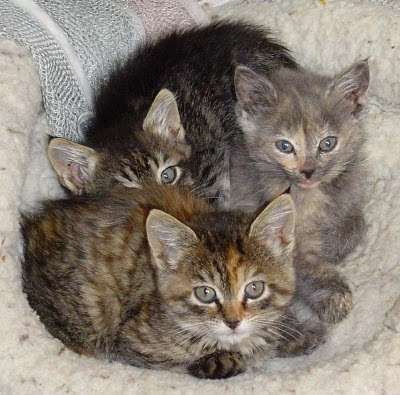 As of last night all of the kittens from the last batch of fosters have been adopted! Kenny was the first to be adopted, followed by Barbie. Kenny was so incredibly gorgeous, that really doesn't surprise me. Krissy and Jellybean got very sick while they were at the shelter so they were in quarantine and weren't available for viewing by potential adopters so that is part of why they took so long to be adopted. They were taken to a PetCo in Colorado Springs a week ago in the hopes that someone would fall in love with them and adopt them together. Yesterday afternoon Krissy was adopted, which left Jellybean all alone. If we had voted on Cat Most Likely To Be Adopted First, Jellybean would have taken that award, paws down. I was chatting online with my daughter when I got the email telling me that Krissy had been adopted. She couldn't believe that Jellybean was still there...alone. Her BF had just come home so she went and told him and he told her to just please go get Jellybean and bring her home! He had already said "I wouldn't be upset if I came home from work and found Jellybean here." (there's a huge hint if I ever heard one!) So, Jellybean is now in her loving furever home. And the best part of it is I get to visit her whenever I want to!! Woo hoo! Way to go Barbie, Kenny, Krissy and Jellybean! 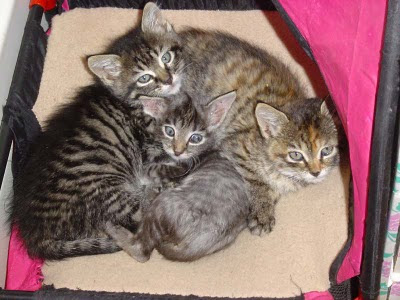 And now Krissy and Jellybean are doing the happy dance!! 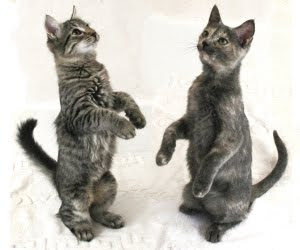 This past weekend we attended the LOCC (Llamas of Central Colorado) Fall Classic Llama Show and the Rocky Mountain Regional Llama Show held together at the Douglas County Fairgrounds in Castle Rock, Colorado.  Because we were volunteering to help at the show we only took one llama since we knew we wouldn't have time for grooming or preparation once we got to the show. We decided to take Midnight Hour's Kemui Yama. You've seen him before here on the blog - last summer I did a before and after segment on shearing llamas and Kemui was our model.

We entered Kemui in the Adult Medium Wool Male classes at the two shows and he placed first in both classes and then took Grand Champion Medium Wool Male! We're so very proud of Kemui, especially since he is a product of our breeding program.

Here's Kemui - photo taken last night after we got home from the shows. The wind was blowing, the light wasn't great at the end of the day and we were all dead beat, but here he is! 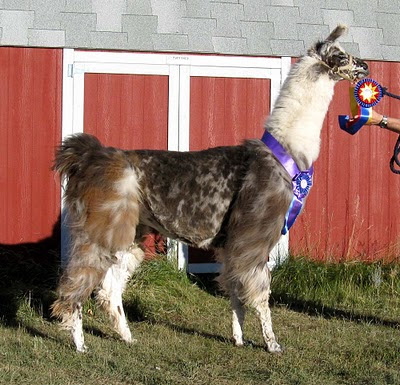 Kemui is a Midnight Hour son out of Nuance, a female that our daughter bought with her own money. Midnight Hour is our first show llama that we fell in love with when he was born in July 1997. We started showing him in January 2008 at the National Western Stock Show.

And here is Kemui with his mother, Nuance, when he was just a little cria. 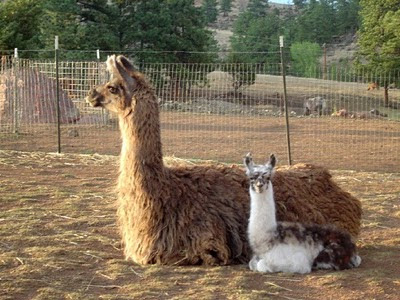 We hope everyone had a safe, relaxing and fun Labor Day weekend!
Posted by Split Rock Ranch at 10:34 AM 8 comments:

We're just hanging out today cuz our foster Mom and Dad are at a llama show this weekend. 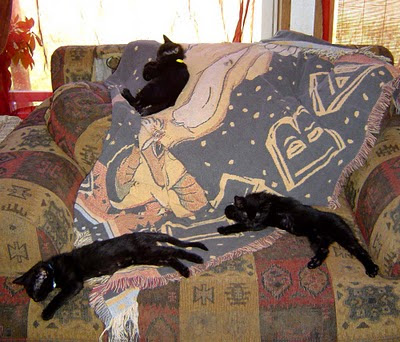 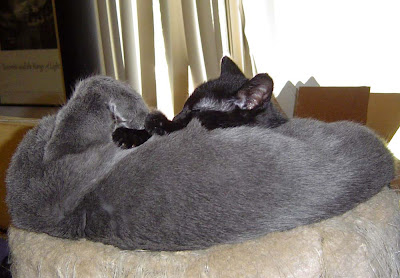 Hope everybody has a safe and relaxing holiday weekend!
Posted by Split Rock Ranch at 6:57 PM 3 comments: