I wanted to share with you a few more things I've made. Each of these accessories is a OOAK Split Rock Ranch Original Design. I did not use a pattern, I just improvise as I go along.

Remember the Peacock long scarf? Well, I used the rest of that skein of yarn and then found some coordinating yarns in my personal yarn stash to finish making this cowl. 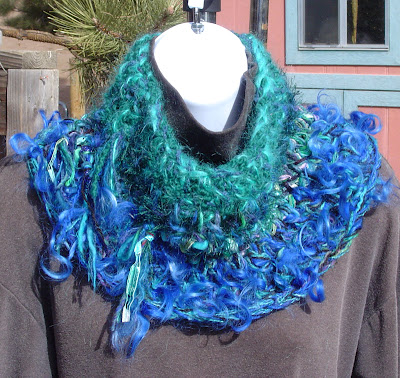 This cowl has loads of texture and those fabulous Peacock colors! Warm, fun and fashionable, I believe this cowl will garner loads of compliments when you wear it.

The Peacock cowl is available for sale in our ArtFire Store.
Then I decided to use two of the same yarns that I used on the bottom part of the Peacock cowl and made this cowl. I used a handspun wool yarn plied with a coordinating colored thread and a hand dyed skein of mohair boucle yarn held together. Then I crocheted a row of the handspun lincoln locks eyelash yarn and wove through a purple organza ribbon. I called this the Mermaid Cowl. This cowl was given to someone who signed up for the Handmade Pay It Forward on our Facebook page several weeks. ago. 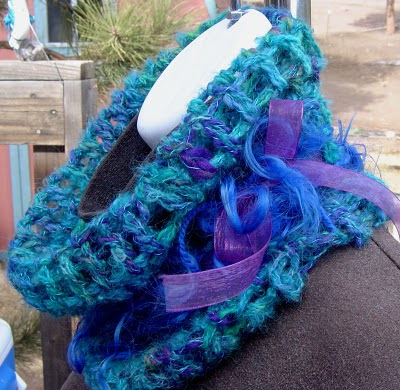 And, by request, I then crocheted another cowl using a cotton/rayon yarn. This person lives in a warmer climate and would love the fashion look of a cowl without the warmth of wool.

So, here's my Melon Cowl. Feeling a little melancholy? Let our Melon Cowly cheer you up! 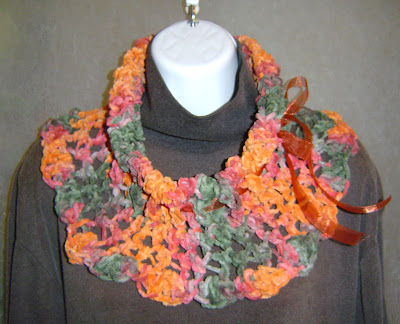 The Melon Cowl isn't listed yet but will be available in our ArtFire store soon.

Life on the Ranch 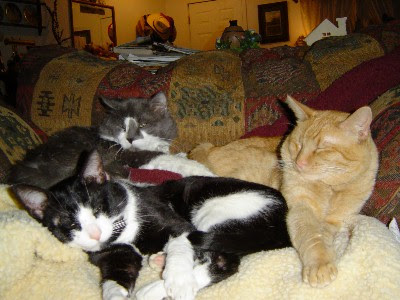 The Three Amigos
Smokey, Buff Ruff & Boots
Sorry I have been AWOL for awhile. One of our older cats, Smokey,  developed symptoms a few months ago when one of our foster kittens, Blackberry, was diagnosed with calici virus. Because it is a virus, pretty much all you can do is manage the symptoms. Blackberry recovered very quickly but Smokey developed anorexia, which is a common side effect because one of the symptoms of calici virus is mouth sores. By the time Smokey finally decided to start eating again he had lost quite a bit of weight and muscle tone. For weeks I was enticing him with every soft food I could think of: meat baby food, canned cat food, yogurt, cottage cheese, scrambled eggs, canned salmon, canned chicken, canned white albacore tuna (less mercury than most), etc. I put fresh food out for him every couple of hours all day long and he was finally eagerly eating every time I put food out for him. I had to stand there to be sure he ate it and not the other cats and the dogs. But I believe Smokey's liver was already damaged and starting to fail. He seemed to be gaining weight. He is a former feral cat that doesn't allow you to pick him up or put two hands on him so I wasn't able to get him onto the scale to weigh him but just looking at him and putting hands on him when I could, I felt that he was gaining weight, albeit slowly.

We debated euthanizing Smokey but he had such a strong will to live that I couldn't bring myself to do it. I figured if the time came where he told us he was no longer willing to fight, we would help him cross over.

Last Thursday Smokey did not meet me in the kitchen eagerly awaiting his breakfast. I found him curled up in a patch of sunlight near the wood stove. He showed no interest in food all day long. He seemed to be a bit constipated and had what we call "poodle butt" - where they get poop crusted on their bum. He would not allow me to gently wipe him clean. When I tried to help him by pressing paper towels soaked in warm water on his bum, he hissed, yowled, bit and scratched me. Finally Thursday evening we put him in the kitchen sink and hubby held him with leather gloves on while I gently sprayed his bum with warm water until he was completely clean. I put Smokey in the bathroom on a kennel heater with a soft fluffy towel, fresh litter box, fresh water and a small plate of canned cat food. He licked at the cat food and curled up on the kennel heater. When I went in Friday morning to check on him, he had just passed away. His body could no longer keep up with his incredibly strong spirit.

We buried him Friday afternoon on a south facing slope in the adult male llamas' pasture, facing south towards the lake. RIP Smokey.

Because Smokey was a feral cat, I know that the 10.5 years he spent with us as an indoor cat were far better than he would have had as a feral cat, especially as an outdoor cat. And I know he lived much longer than most ferals ever do. I'm just glad we were able to provide him with a loving, supportive home as long as we did.


Here is Smokey snuggling with Blackberry and Blueberry last September 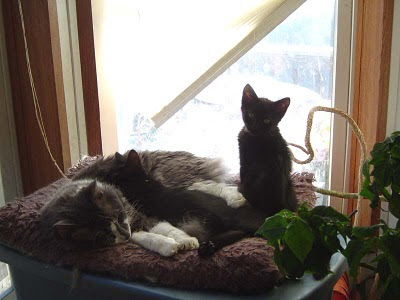 Recently I saw a new yarn listed in Cool Climates shop on Etsy and fell in love with it. It is a component yarn, which consists of several commercial yarns tied together. Here is how Rachel describes the yarn in her listing:

Made from many commercial yarns tied together. The yarns contain all kinds of fibers including wool, mohair, cotton, synthetics, tencel and more. Some are handspun and hand dyed. Some top name brand yarns including Colinette "Fandango" and another Colinette hand dyed wool (can't remember the line). There is also some Noro "Kureyon." A dramatic colorway of deep emerald, spruce, green, teal, turquoise, violet, and some lighter blues and greens. 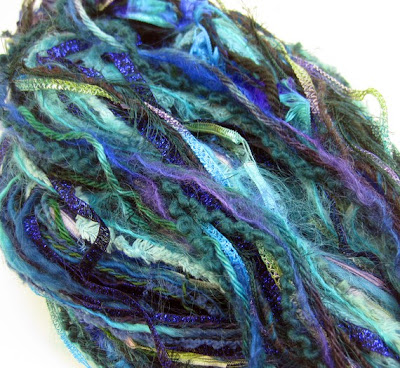 This yarn is very similar to Prism's "Wild Stuff" and "Cool Stuff" yarns.


I grabbed a set of size 19 knitting needles (they're HUGE) and started knitting. I didn't use a pattern, I just went with my intuition and cast on a certain number of stitches and then just used a simple stockinette stitch until the scarf was the length I wanted. I then found some yarns in similar colors in my yarn stash and used those to make the fringe.

I debated on whether or not to bling this scarf up a bit more by attaching fringe all along the scarf but decided the yarn was so spectacular that it didn't need any special stitches or special bling to make it look incredible.

Here is the finished Peacock scarf.

You can wear this scarf so many different ways. Put the scarf on "backwards" against the front of your neck and flip each end over the opposite shoulder and bring back around to the front. 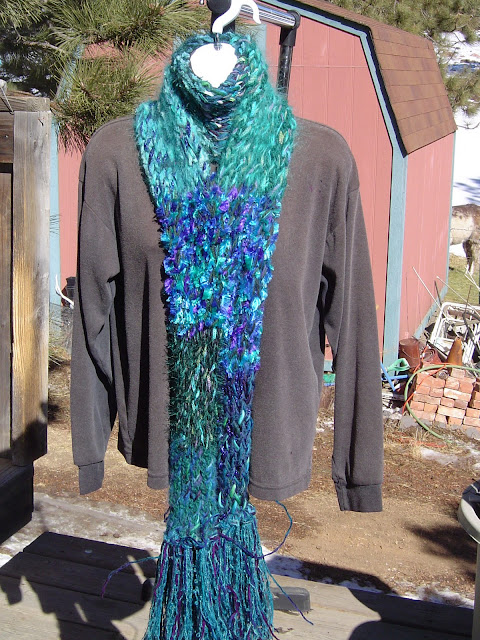 Or, simply drape the scarf around your shoulders. You need to be really tall for this one because it will probably be halfway down your legs if you aren't!

Or, fold the scarf in half, drape it around your neck and pull the ends through the loop.

There are so many different ways to wear this scarf. Use your imagination and your fashion savvy to come up with all kinds of different ways of wearing this incredible piece of fiber art.
Proud as a Peacock, that's how you'll feel when wearing this gorgeous fashion accessory!
For sale in our ArtFire store.
Posted by Split Rock Ranch at 6:00 AM 7 comments:

Valentine Sale in the ArtFire Store

To celebrate Valentine's Day I am offering 14% off selected sections of the ArtFire store. Basically it is everything except spinning, knitting and felting supplies. Handmade scarves, yarns, fibers, etc. are all fair game.


Visit SplitRockRanch's Studio
SAVE 14.00 % On Select Studio Categories
Use Coupon Code:
BEMINE
during checkout.
Handmade Dolls
Posted by Split Rock Ranch at 10:17 AM No comments:

Wordless Wednesday - At least somebody enjoys the snow 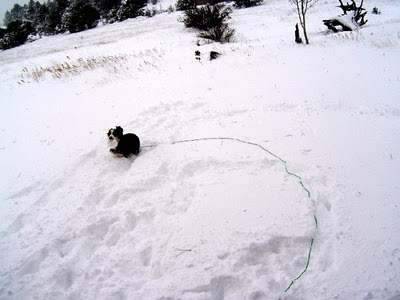 A couple of months ago I created a long skinny extreme fringe scarf using some wool and silk yarn and a skein of tailspun yarn for the fringe. Normally these scarves sell very quickly but this one has sat in the store with lots of views but no buyer. I didn't know if it was the color of the scarf or the design that was the problem. This was the only scarf with this particular design so I thought perhaps that was the issue.

The scarf portion was "limper" than I wanted it to be. I wanted the scarf to be fluid and drape well but it was too fluid for my taste, at least for these scarves. Last weekend we went shopping in Colorado Springs and ended up at Hobby Lobby since it is next door to Office Depot. Ribbon just happened to be 50% off so of course I couldn't pass up a SALE, especially on something that I use all the time. I selected a variety of ribbons in rust/copper/maroon/burgundy in a couple of widths. I chose a couple of the colors that best matched my Spiced Curry scarf and wove ribbons through three rows of the scarf. While I was doing this, I didn't pull the ribbon all the way through the scarf at first. When I looked down on the table and saw the scarf bunched up I realized it would look awesome ruched into a neck warmer!


Here is how the scarf looked originally

A huge improvement, in my opinion.
And here is how the scarf looks ruched into a neck warmer 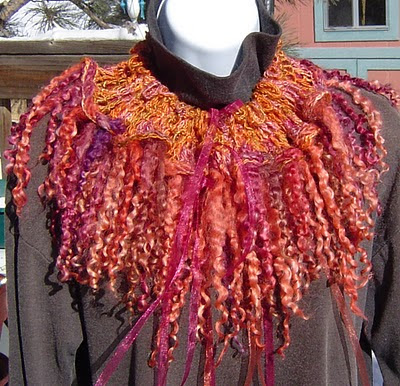 Now I absolutely adore this scarf/neck warmer! I'm still playing with ideas on what to do with all that ribbon when the scarf is ruched into a neck warmer. But overall I think the change is so much nicer than the original design, and so much more versatile, too! You can wear it ruched into a neck warmer, long and straight, wrapped around your neck a couple of times, folded in half and the ends pulled through the fold; your imagination is the limit to the number of ways you can wear this gorgeous scarf. And I love the rich colors, too. Let me know what you think of the modified and improved Spiced Curry Scarf/Neck Warmer!

This scarf is available in my ArtFire store: Spiced Curry Scarf/Neck Warmer
Posted by Split Rock Ranch at 9:58 AM 5 comments:

Good news! Mickey, one of our last foster kittens, got adopted yesterday! I don't know who adopted him but I'm hoping it was a family with a couple of kids who will play and play and play with him. Way to go Mickey! I really wanted to adopt Mickey but DH said we didn't "need" another cat. Then when the time came to take Mickey back to the shelter, DH had also fallen in love with him so he said if Mick wasn't adopted in two weeks we'd go get him and adopt him. The two weeks was up today. Just in the nick of time... 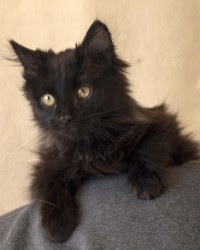