All Gave Some - Some Gave All

While Memorial Day weekend marks the "official beginning of summer" it is also a time to remember those who served our country and paid the ultimate price. Thank you to those who have given their all to protect, defend and serve our country. All Gave some, but some gave all. I love this song by Billy Ray Cyrus - "Some Gave All"

Email ThisBlogThis!Share to TwitterShare to FacebookShare to Pinterest
Labels: Memorial Day, Some Gave All

I want to wish everyone a relaxing, safe and fun Memorial Day weekend! What do you do to celebrate the official start of Summer? Do you go camping? Do you have a cookout on the patio or deck? Share your special way of celebrating this weekend. 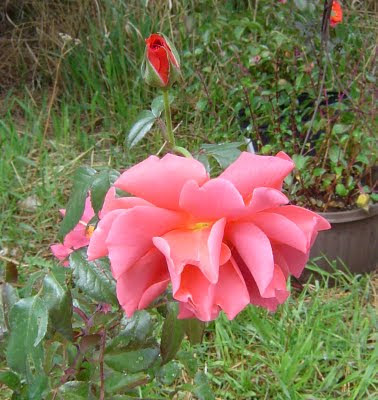 We don't have anything special planned for this weekend. We were supposed to be attending and exhibiting at a llama show but the show was canceled due to the outbreak of EHV-1 (equine herpes virus). The show was canceled as a cautionary measure so that exposure to the camelids was reduced. So we have an unexpected "free" weekend!

We plan to set up our smoker and smoke a chicken, a cornish game hen and a couple of hugs slabs of Alaskan Salmon. We'll have enough meat to last the entire weekend without having to cook every day.

Tomorrow we'll probably start shearing llamas and trim toenails as needed. Then we'll relax the rest of the weekend and enjoy our time off.

And I have new rose bushes to get planted. I bought these a couple of weeks ago at Lowe's for only $5! 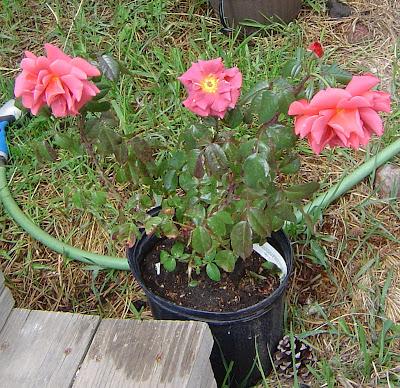 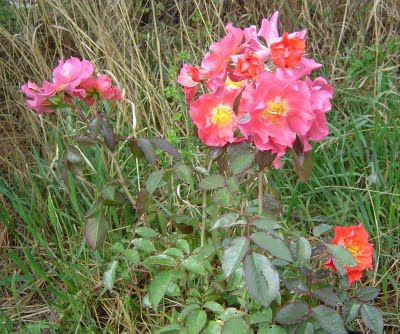 To help kick off summer and to celebrate the long holiday weekend, I'm having a sale in my ArtFire store! Use the coupon code Memorial 10Off to receive 10% off everything in the store!


Visit SplitRockRanch's Studio
SAVE 10.00 % On
All Items
Use Coupon Code:
MEMORIAL10OFF
during checkout.
Holiday Decorations
Posted by Split Rock Ranch at 10:09 AM 4 comments:

Saturday afternoon our daughter called to tell us that our son had called her wanting to know if she could come get a little feral/stray kitten and take care of it. Apparently a momma kitty had kittens under the bay window at our son's house. While she was moving kittens to a new location she either dropped one or he wandered off while she was moving the others. Our granddaughter found a kitten and picked it up and brought it into the house. Momma didn't come back for him. So, they called our daughter, knowing she has experience with raising tiny kittens. We went down the mountain to Colorado Springs on Sunday to see the kitten. He is one of the cutest little kittens I've ever seen. Because our daughter works a full-time job and because this little guy is young enough that he needs to be bottle fed, I offered to take him and raise him. It just makes more sense because I work from home and can feed him every few hours without any problems. I think he is probably about 4 weeks old. One of our male cats, Munchkin, was a rescued feral kitten that we also bottle fed and he loves helping to take care of kittens. 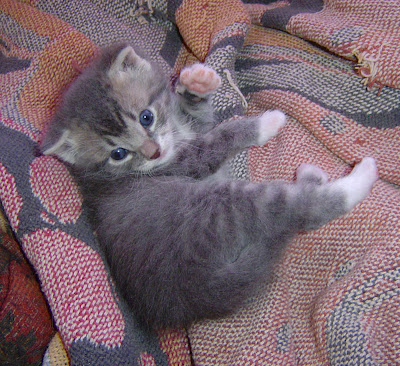 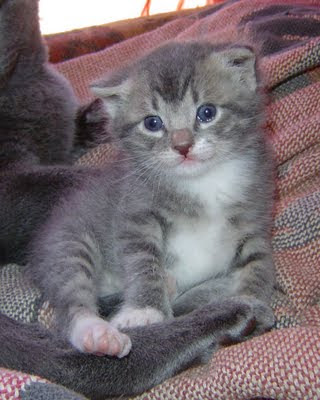 And here is little Mowgli with Uncle Munchkin 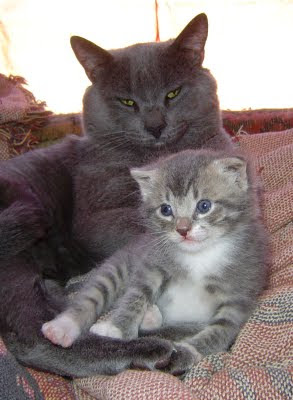 And I took a video with my digital camera (I've never used this feature before!)
I had just fed little Mowgli his bottle and Munchkin was laying behind us on the chair so I set Mowgli up with Munchkin and Munchie started to clean little Mowgli. 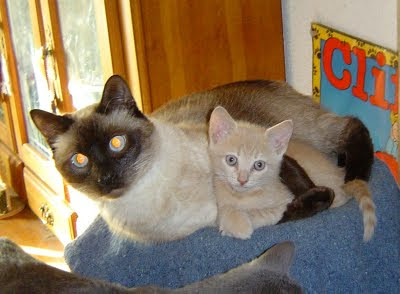 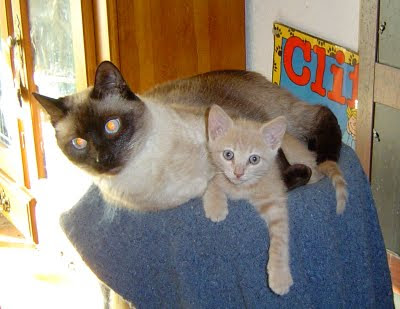 Here are the three of them - for some reason they insisted on sleeping on the toilet seat - go figure. 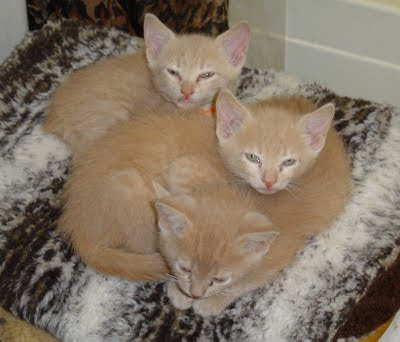 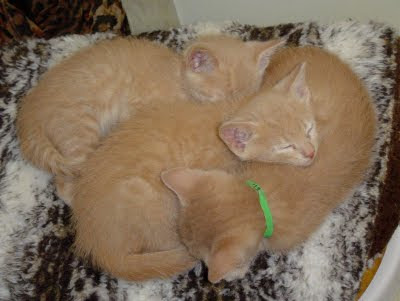 It is Elton in the back, Elmo in the middle and Eli in the front. Its hard to tell them apart just looking at them so the shelter put different colored collars on them with their names written on them. We're learning to tell them apart by personality though. They are probably the sweetest, friendliest litter of kittens we've ever fostered.

Eli is quiet and reserved, a bit shy, but he loves people and is perfectly content to sit in one of our laps and purr. Or he's happy laying on the sheepskin rug in Jim's office. Elton, on the other hand, has earned the nickname "Mountain Goat" or "MG" because he climbs everything. He can't sit still; he has to be on the move and exploring everywhere. He's learned that the dogs are fun to play with but I think he's getting tired of getting a bath when playing with them. Annie, my Aussie, loves to lay down with Elton between her paws, licking and licking and licking on him. And little Elmo is in between. Sometimes he's content to lay in one place and nap and other times he's off with Elton playing.

Today I was taking photos of some new fleeces and I got some really good pics of Elmo playing on the back of the chair. 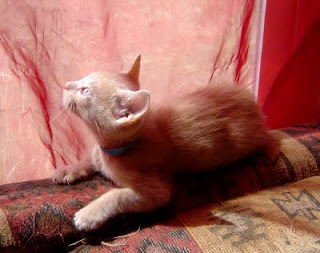 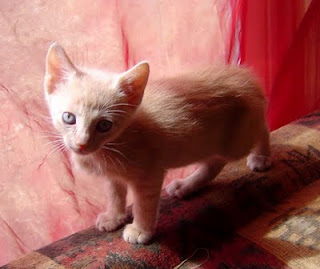 But soon it was nap time for little Elmo. 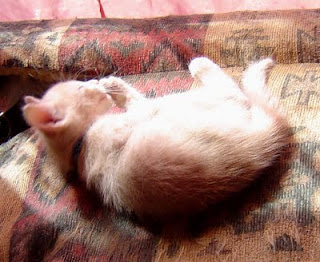 Wishing my Mom and all the other Mom's out there a very Happy Mother's Day! 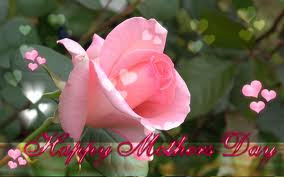