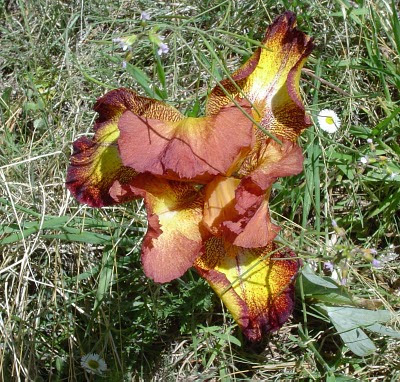 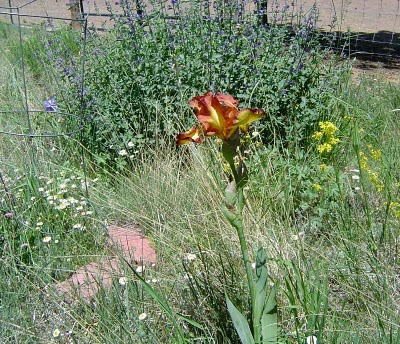 I have been AWOL - Sorry!

I am so sorry that I haven't posted anything in almost two weeks! It has been so crazy busy here lately that I just haven't had the time or energy to put up a new post and some days I haven't even been able to get through all my emails.

This is going to be a hodge-podge post of what is on my spinning wheel and what is next in the spinning queue, llamas, foster kittens, etc.

Here is what is on my spinning wheel right now - Zinnias colorway on merino roving by Spinningawesomegood on Etsy. I split the roving into thinner strips and separated those strips into approximately equal weight halves that I will spin on two bobbins and then ply together to allow the bright colors to fall where they may - it should be a vibrant yarn! 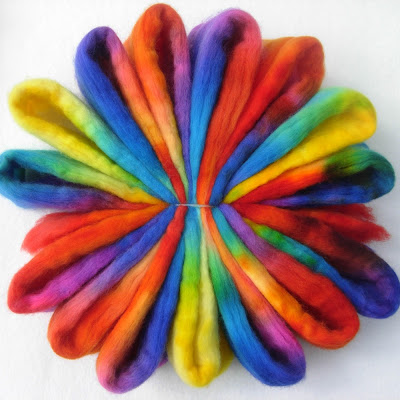 Next up is a custom dyed superwash BFL roving that I dyed for a customer who wants to make socks out of the finished yarn. I don't have any photos of the colorway but it is in shades of Burgundy, Russet, Gold Ochre and Olive. It will be spun onto two bobbins and plyed to allow the colors to fall where they may and blend together throughout the length of yarn.

Then I have a custom order to spin the following roving - a merino/tencel roving that I dyed in my India Spices colorway. This yarn should have incredible drape and luster to it! 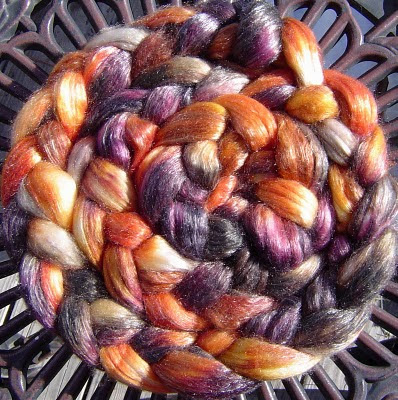 We have sheared a few more llamas in the past couple of weeks but our schedule has not allowed us to shear as many as we would have liked and we are quickly running out of time to get them sheared. I don't like to shear any later than mid-July because we start getting snow early (last year we got our first snow on the last day of summer) and we can get snow into May so I want to be sure that the llamas have enough fiber growth before the cold weather and snow hits.

We sold another llama this past weekend. This is Midnight's Amazing Grace - these photos are from when she was a yearling and she has grown a LOT but I don't have more recent photos to share. We sheared her for her new owners so she will be nice and cool at her new home. She has been reunited with her mother and one of her sisters at her new home so she is very happy where she is at now. 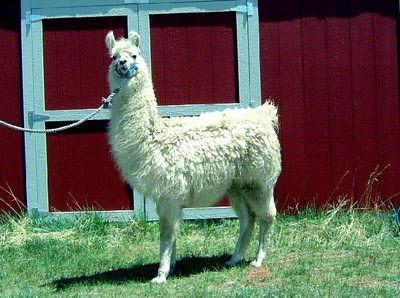 And I can't resist sharing a photo of Grace when she was a cria - sorry but her momma's behind is in the photo, not her best side! 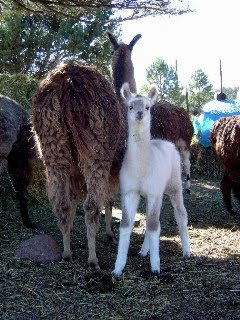 And, no, that isn't dirt on Grace, she had gray on her face, legs and down the center of her back when she was young!
The foster kittens are growing like crazy and are slowly getting better adjusted to being around people and the dogs and other cats. They should be ready to be spayed and neutered within the next couple of weeks and ready for adoption to their new furever homes. Jellybean has been dubbed "dangerously cute" by our daughter, who has nicknamed Jellybean "The Geiger Tiger" because she purrs constantly! 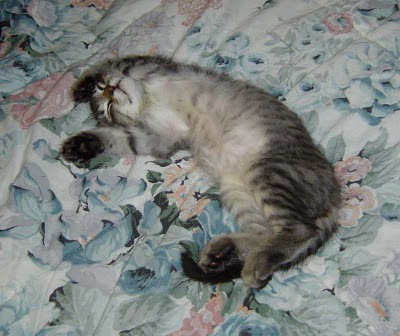 Uncle Munchkin with Barbie, Kenny and Jellybean. Krissy was sleeping in the cube instead of in the tub with the rest of the crew. They love sleeping on the bags of wool!
So, that's some of what we've been up to lately. How is everyone else's summer going?!
Posted by Split Rock Ranch at 8:42 PM 6 comments:

Yesterday I curated another Treasury on Etsy. This one was inspired by a fabulous sunset photo in someone's etsy shop so I set out to find fibers and misc. items in sunrise and sunset colors. I think I found some amazing art to feature - from photos to yarn to spinning batts and rovings to handdyed silk scarves to handknit scarves to handmade polymer clay pendants and hand beaded bracelets to handmade soap. 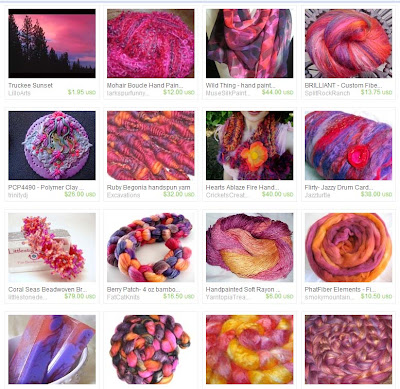 Black Pearl has a new home!

Last Sunday some of our customers came to the ranch and brought two females they recently purchased from us so we could shear the girls and then breed them to our males. I did a modified lion cut on both of the girls. I usually only shear the barrel section but it is much hotter where they live now so I sheared the barrel and most of their back legs. They are so much cooler now!

While they were here, our customers/friends were looking at our young male llamas and fell in love with Black Pearl. I had barrel sheared him on Saturday in case some other prospective buyers might be interested in him (which they weren't - but now I know why I needed to shear him). Black Pearl is out of Minnie Pearl who consistently produces extremely sweet and easy to handle crias. He has always loved to give little llama kisses through the fence. When he started giving kisses on Sunday, they fell in love with him and wanted to take him home.

Here is Black Pearl after shearing - he has gone to a wonderful loving home where they are already referring to him as their "main man". 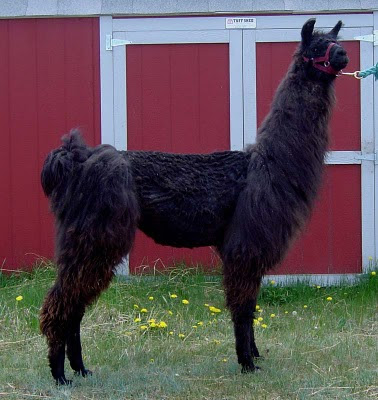 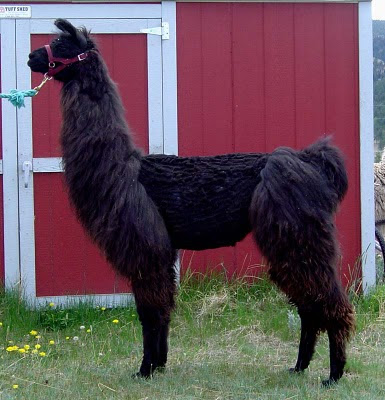 I've been busy spinning lately and finished up three skeins of yarn.

First up is a merino/bambo/silk 50/25/25 roving handdyed by Coby Kopec of CJ Kopec Creations in her White Cap colorway. This roving was a joy to spin - so soft and easy to spin thin - I ended up with a light DK weight 350 yard two-ply skein that weighs 3.7 ounces and then navajo-plied the remainder of the yarn into a 24 yard skein that weighs 0.3 ounces. This yarn is incredibly soft with amazing drape and luster. White Caps is available in my Etsy store.

Here's the roving before spinning 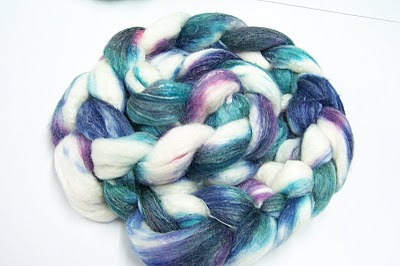 And here are the finished yarns 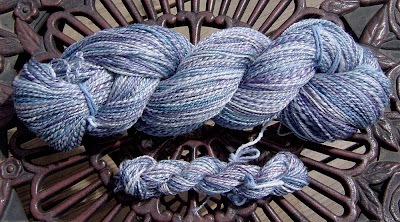 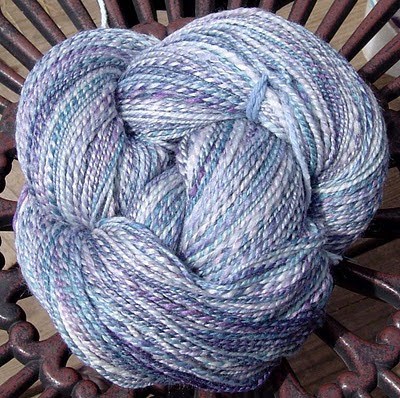 And here is the second set of yarns. I spun up a beautiful batt called Peacock created by Esther at Jazz Turtle Creations on Etsy. The batt contained: merino, milk protein, bamboo rayon, kid mohair locks, border leicester locks, glitterati, sari silk tangles, angelina and are plied with a cotton yarn/thread in coordinating colors.
Here is the batt before spinning 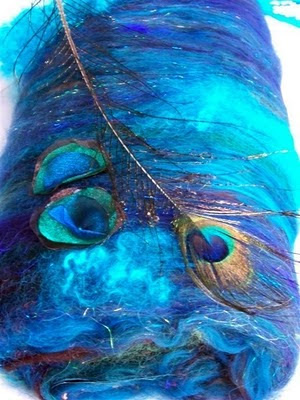 I spun this one thick and thin and plied it with a cotton yarn/thread in coordinating colors. I had so much yarn that it wouldn't all fit on the bobbin so I had to make two skeins of Peacock yarn. The first skein is 89 yards and 3.3 ounces. The second skein is 85 yards and 2.4 ounces. Both are worsted weight yarns. The second skein is a bit thinner than the first one. Peacock and Peacock II can both be found in my Etsy store. 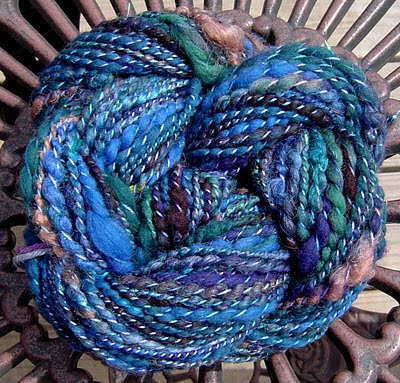 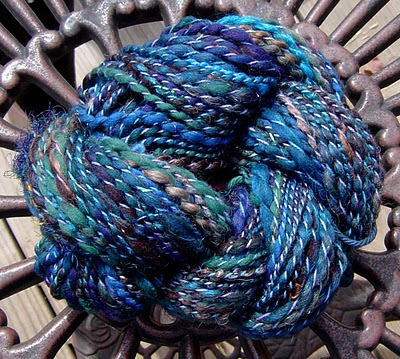 The foster kittens have grown like crazy in the past week! Little Krissy who was so emaciated that she couldn't even stand up on her own when I got her now looks like Jabba the Hut. My vet told me that feral and stray cats who don't know when or where their next meal will come from will gorge themselves when they find food. Apparently Krissy fits this profile. Poor little baby. I'm just happy that she has put weight on and is playing with the other kittens. They are still a bit jumpy around people but are warming up to us and getting better every day.


Here is Kenny, lounging on his favorite fleece blankie. 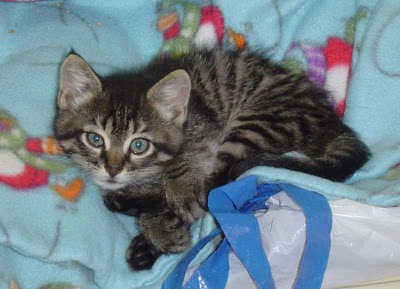 And Barbie lounging on her favorite blankie (doesn't she look like she's smiling?!) 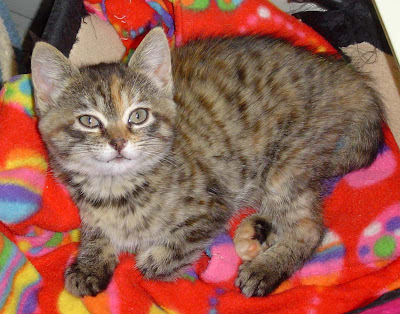 And Krissy has crawled up to the highest spot she could find and is lounging on her favorite sherpa fleece bed (see the Buddha belly on this girl?!) 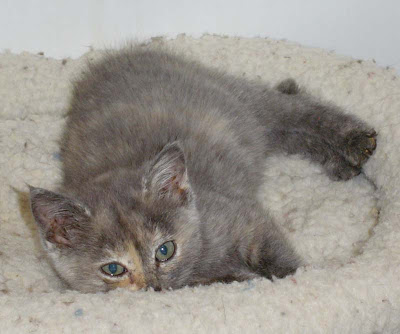 And last but certainly not least is little Jellybean who is now completely off the bottle and on solid foods with the rest of the kittens (whew!) And her hair has grown back, too. 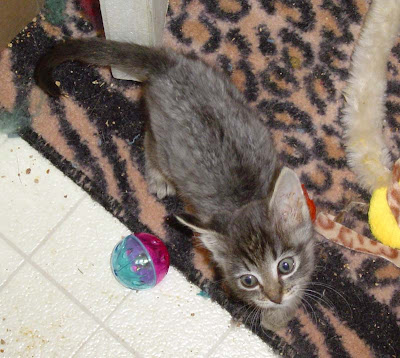 She runs to us and climbs right up our legs and all the way up to our shoulder where she sits like a little parrot. 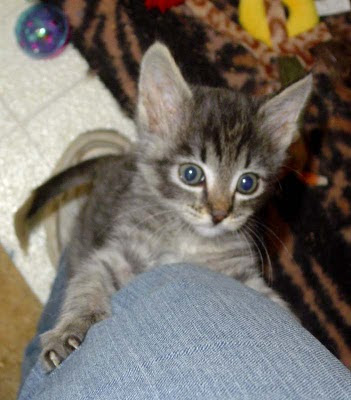 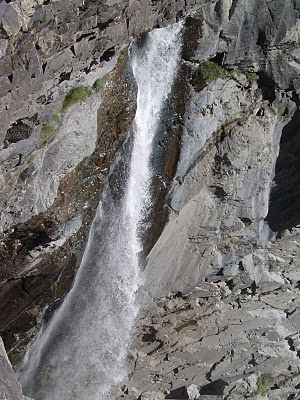 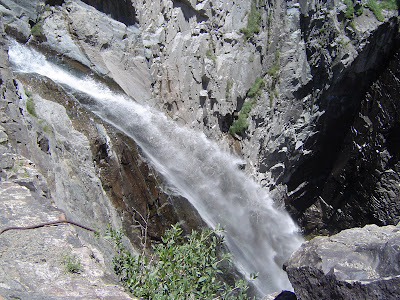