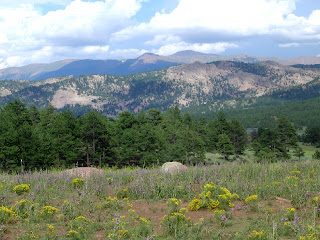 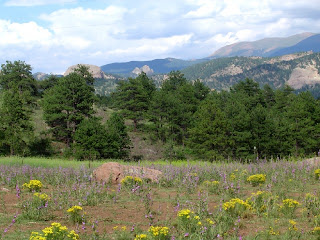 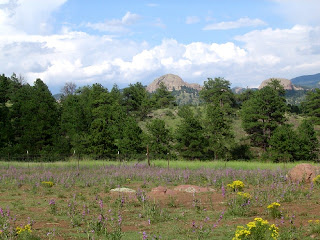 I wish the colors of the Penstemon had come out better on these photos. Photos just cannot do justice to how the field of flowers looks when you can view the entire thing in one frame! The lighting isn't the best as the photos were taken late afternoon. And the flowers took a beating from all the rain we've been getting lately. We had about 1/2 inch today, about an inch on Saturday, and 2.75 inches last Thursday! The flowers like the rain but the hail was a bit rough on them.
I don't know what the yellow flowers are - I just know the plants really stink and the llamas won't touch them. The llamas and horses won't eat the Penstemon either - which is great! Flowers that the animals don't eat - what a concept! Wish the deer could grasp that concept and leave my flower garden around the house alone! They always wait until the flowers are just ready to open up and then they eat them. I snagged the lone rose growing in the garden and brought it in the house in a little bud vase before the deer had a chance to gobble it down. I was so thrilled to see that a rose bush made it through the winter this year. I have tried for 10 years now to get a rose bush to grow here without success. I finally planted the rose in a sheltered location under a pine tree on the north side of the house, tucked into a little area just off the deck and stairs. And then after the first hard freeze I mulched it really good with a big pile of llama fleece that was too dirty and matted to use for anything else. Finally, a good use for those nasty llama fleeces that have been on the animal just a little too long! Unfortunately, clover has taken over the flower bed this year. Does anyone have any suggestions on how to get rid of clover? I need to find out if it is poisonous or noxious or if I can safely feed it to my bunnies. The bees love the clover and it does smell nice but I would prefer the yarrow, clematis, rose bush and sweet william I planted in the bed!
The first photo is of Pikes Peak in the background. The second and third photos have Dome Rock in the background.
At any rate, enjoy the view! 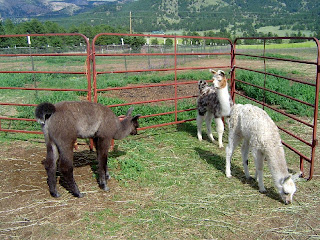 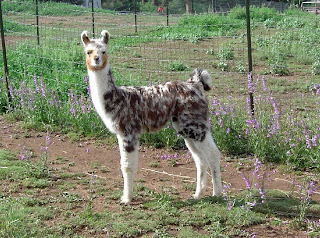 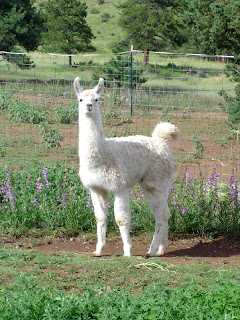 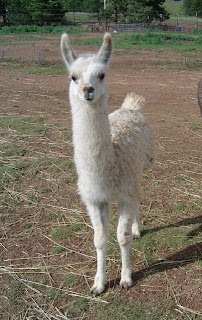 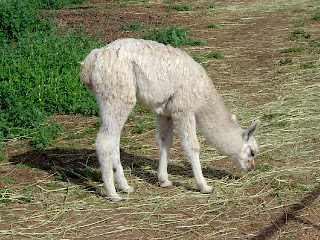 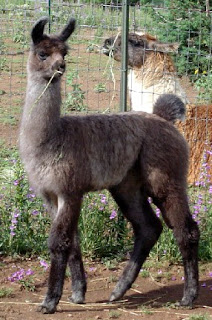 Here are updated photos of our crias taken today 7-23-07. At top is Argentum, Mr. C (Chocolate Chip aka CUTE!) and Dusty Rose. Next is Mr. C, followed by Moonbeam, followed by Dusty Rose (front, then next photo is side), and last but certainly not least is Argentum.
Moonbeam has put on a lot of bone and has incredible crimp and wave in his fiber. These photos were taken after a rainstorm so the fiber is still damp.
Mr. C remains absolutely adorable - a 10 on the Cuteness scale for sure!
Dusty Rose is such a petite and feminine little thing. I wish you could see how beautifully silky her fiber is.
And Argentum - he really is an awesome young boy! Beautiful color, lots of presence and style, strong level topline, nice heavy bone structure - we wouldn't change a thing about him. He's on our roster for the showring next year!
Notice all the beautiful Penstemon flowers in the photos? I'm going to post flower photos in another blog post.
Enjoy!
Posted by Split Rock Ranch at 8:00 PM 1 comment:

Email ThisBlogThis!Share to TwitterShare to FacebookShare to Pinterest
Labels: Crias 7-23-07 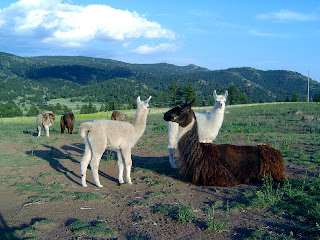 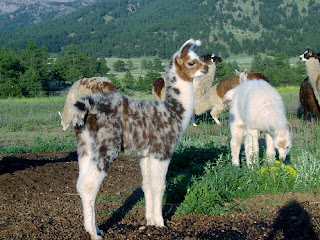 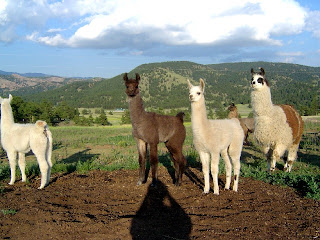 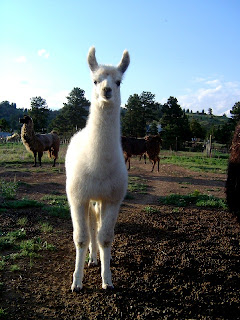 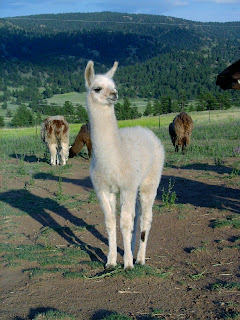 As promised, here are updated cria photos taken Friday evening, July 13th. These little guys are growing like weeds! And they're as cute as the day they were born, actually probably even cuter. :o) Enjoy!
Top: Dusty Rose (L) and Moonbeam with Nimbus (our gelding babysitter)

Second: Mr. C (center) and Moonbeam (R)
Third: Moonbeam (L), Argentum (middle), Dusty Rose (R) - adult female to R is Diamond's Crown Jewel
Fourth: Moonbeam
Bottom: Dusty Rose
Photographing llamas is next to impossible in the field sometimes. When I squat down to take a photo, the llamas all come rushing up to see what I'm doing. The crias are fascinated with the camera and sometimes all I manage to get shots of is their little nose as it zooms in on the camera lens. If I wait long enough, they will eventually forget that I'm there and go off to graze or play and then I can get better photos, until I move and then they're back focused on me and the camera. I'll keep trying to get good photos of them to post.
Posted by Split Rock Ranch at 9:53 AM No comments:

Email ThisBlogThis!Share to TwitterShare to FacebookShare to Pinterest
Labels: Crias 7-13-07 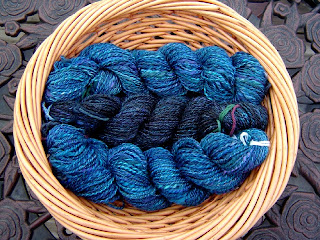 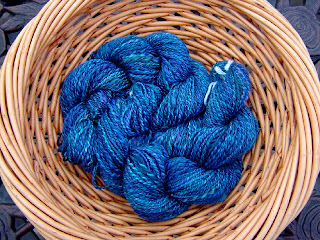 As promised, here are photos of the Peacock Custom Fiber Blend yarns, also shown with the alpaca/silk yarn in coordinating colors. This yarn has such wonderful drape and is silky soft. I am going to snag the last Peacock wool and silk rovings from my eBay and etsy stores so I can card more of this delightful blend up and spin more yarn. This will make an incredible shawl - with hopefully enough yarn to make fingerless mitts and maybe a spiral scarf.

Posted by Split Rock Ranch at 7:13 PM No comments: 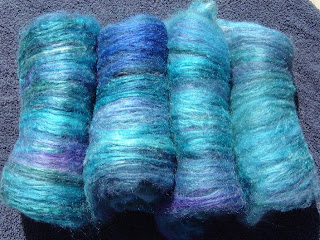 Here's what is currently on the spinning wheel. I blended some custom dyed domestic 56s roving and some custom dyed tussah silk and blended them 50/50 on my Ashford hand crank drum carder to make this awesome batch of custom fiber blend (I named it Peacock - bright blue, turquoise, purple and teal), which I offered in my etsy store for a month and when no one bought it I pulled it and started to spin it. It spins like a dream and the resulting yarn is gorgeous! I'll take photos of the yarn in a day or so and get them posted. The yarn came out DK weight (a little over 1200 yards per pound). I still have a 1.7 oz roving of tussah silk in this same colorway that I'll probably pull and spin very thin to coordinate with this custom fiber blend yarn. I have some black/turquoise/teal alpaca/silk roving that coordinates very well with this colorway so I'll probably mix and match skeins to make a shawl of some sort - maybe a matching spiral crocheted scarf and some fingerless mitts if I have enough yarn.
Posted by Split Rock Ranch at 8:13 PM No comments: