Labor Day is behind us and Summer is pretty much over. We had a wet summer for a change, which was nice because it was getting really old loading up all our crates and cages to be prepared for evacuation due to wildfires. Because of the moisture, we have so much green grass (and weeds) coming up all over the property. The llamas are loving the grass in the pastures this summer! The greenhouse looks like something from the movie Jumanji. 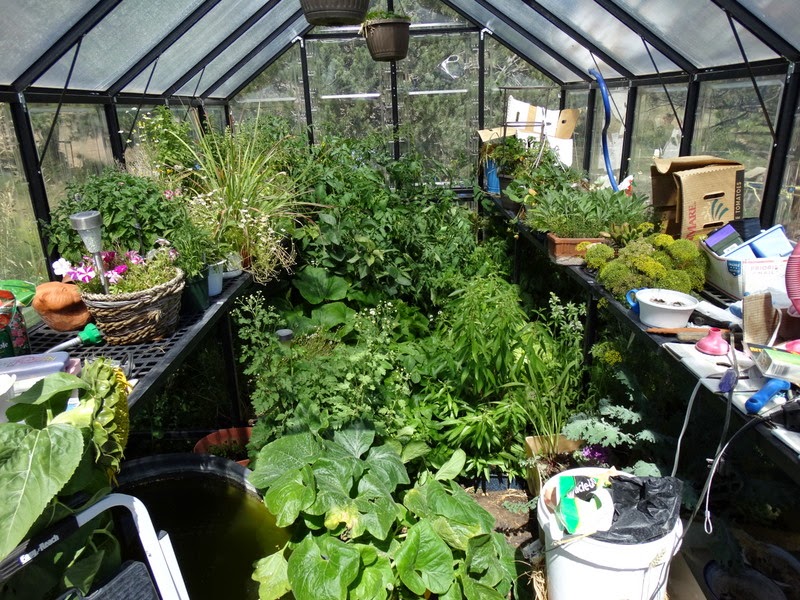 I didn't even plant everything that is coming up in the greenhouse! In the center front is a vine that is some kind of squash. I assume it must have come from the seeds/feed that I gave the duck and chicks when they were in the greenhouse this past Spring. I set a bag of seed potatoes on the ground after planting some outside and in a potato pot and when I tried to move the bag a couple of weeks later, the bag came up but there were potato plants growing on the ground! I just piled some soil over them and let them go (that's mostly what is in the center of the greenhouse.) At the far center back is a tomato plant that is almost a tree/bush! It is loaded with tomatoes and I hope I can keep the greenhouse warm enough to harvest them when they're ready. There's another vine on the left, under the shelving, that I didn't plant and I assume it must be squash, the same as or similar to the one growing up front. I need to harvest the hot banana peppers that are so big and numerous they're making the plant flop over (back by the big tomato plant.) I think I'll try making some salsa using the peppers, tomatoes, basil and cilantro (which I didn't plant but it is coming up inside and outside the greenhouse.)

Outside the greenhouse is another lush paradise just loaded with blooms and fruits. 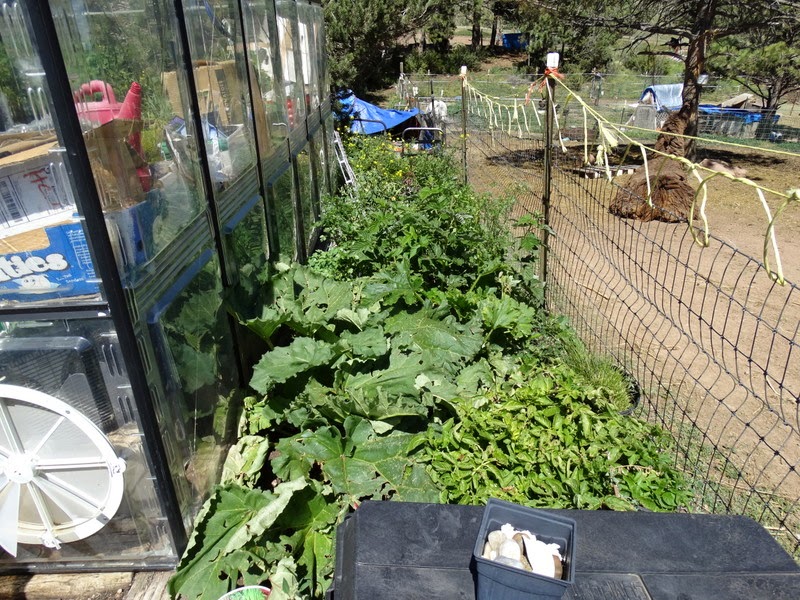 I planted a rhubarb plant up front against the greenhouse and it got HUGE. The potatoes are to the right of the rhubarb. Behind that is a raspberry bush that grew well but didn't produce any fruit this year, which is fine because I'd rather the plant get well established this year so that it makes it through the winter and will hopefully produce next summer. There are two lavender plants back in there, along with cilantro (that I didn't plant), two rose bushes, three different types of mint, peas (which I need to harvest today!) and a blackberry bush that didn't grow a lot but it was bare root so those take longer to mature.

A few weeks ago I made a strawberry/rhubarb pie using store bought fresh strawberries and rhubarb from the garden and OMG was it delicious! Maybe I'll try making some strawberry rhubarb sauce and can it. Or, I may take some of the rhubarb and wash it, cut it up into chunks and freeze it for use later this winter.

Because of all the moisture this summer, hay prices dropped so we were able to put up enough hay to get us through the winter and paid about half of what we paid the past couple of years. Later this week I'll do another post showing our two new hay "barns". We sheared the goats this summer and they look so cute with their curly locks growing back in. We also hatched out some chicks and added a few more to our flock - I'll post about chicks and goats later this week, too.

I know I've been neglecting this blog lately. With the exception of the posts I've done regarding product reviews, I haven't done much. My right knee is bone on bone and I need a knee replacement so this summer I didn't do nearly as much as I normally do so there wasn't that much to blog about!

Thanks for visiting - I hope you had a great Summer and are ready for Fall!